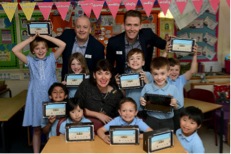 Perry Wood Primary School on Saint Albans Close in Worcester received a boost from its neighbours at Perry Manor care home, in the form of a £1,000 donation towards the school’s breakfast club.

Pupils of all ages who attend the breakfast club were given the opportunity to vote on exactly what equipment the funds from Perry Manor could be used to purchase and they decided on eight state of the art tablets.

The Perry Wood Primary School’s breakfast club, which operates from 8am till school starts every day, has been hailed in the House of Commons as a great initiative, which has helped unemployed parents get back into work. It has also been acclaimed for drastically increasing pupil’s attendance – from 90 per cent two years ago, to 96 per cent in 2014, as well as improving general behaviour.

Perry Manor’s home manager, Mike Dearn, said: “The team at Perry Manor is keen to forge links with the local community and to get to know our neighbours. We already have a fantastic relationship with Perry Wood Primary School – the children have visited us in the past – and we wanted to build on this by lending a helping hand with the breakfast club.

“The club has already proven to be a great initiative for the local community and the school children also seem to love attending every morning. I’m thrilled we have been able to give the club a boost with our donation. I plan to continue to work with the school on future projects such as the breakfast club and offer support where we can.”

Tracy Kelly-Freer, head teacher of Perry Wood Primary School, added: “We were delighted to receive the donation towards the school’s breakfast club and the funds have provided new, cutting edge technology to stretch the children’s minds before school starts.

“The breakfast club has gained an excellent reputation and providing new equipment creates a lot of excitement among the children. I can’t thank Perry Manor enough for their support and we look forward to working together on future projects.”