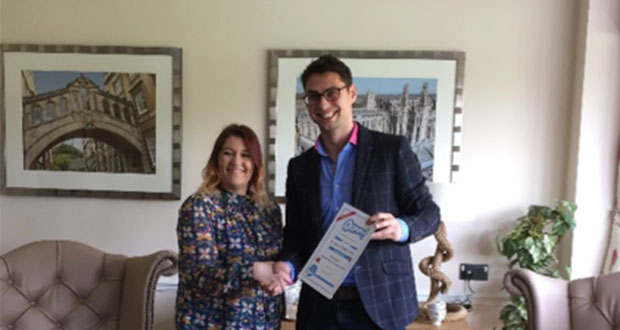 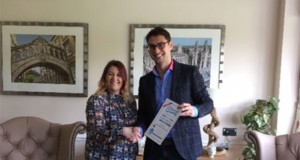 A Bicester resident, Amber Darbyshire, has been recognised for her outstanding work delivering innovative and engaging activities for older people, after coming runner-up in a national competition.

Amber is the Activities Manager at Manor House Care Home in Merton, and was awarded the runner-up position in Oomph!’s nationwide ‘Instructor of the Year’ competition. Oomph! is an award-winning social enterprise that supports care homes to deliver accessible exercise classes for older people, promoting mobility, stimulation, and social interaction. The classes are co-designed with care home residents and fun is at the heart of each activity.

Over the past year, Amber has harnessed her creativity and Oomph! classes at Manor House have seen residents pom-poming at Southend-on-Sea and on a barge cruising down Henley-on-Thames. A favourite with residents, volunteers, and carers alike, was a wheelchair ice-skating session at Oxford Ice Rink.

With support and encouragement from the management team, Amber has led on making sure that an exciting programme of activities is available to all residents. To make sure the exercise classes are inclusive, Amber also delivers one-to-one sessions for residents living with end-stage dementia, using sensory objects and music to help promote mobility.

Amber’s work was celebrated at a ceremony at Manor House. She was presented with flowers from the Embrace Group’s Chief Executive, Trish Lee, and Chief Operating Officer David Manson, as well as a £75 contribution towards and Oomph! party  by [insert name and role] from Oomph!. The Embrace Group, which owns Manor House, has 91 trained Oomph! instructors across its services nationwide.

Amber Darbyshire, Activities Manager at Manor House, commented
“I am so happy to have come runner-up in Oomph!’s competition. I come to work every day with a smile on my face, and Oomph! has really helped the whole team to become more confident in supporting residents to exercise. The whole team at Manor House is so enthusiastic, going above and beyond to make sure that residents are always provided with stimulating and exciting activities to get in involved with.”
Manor House is part of Embrace, and provides personalised nursing, residential and dementia care for older people