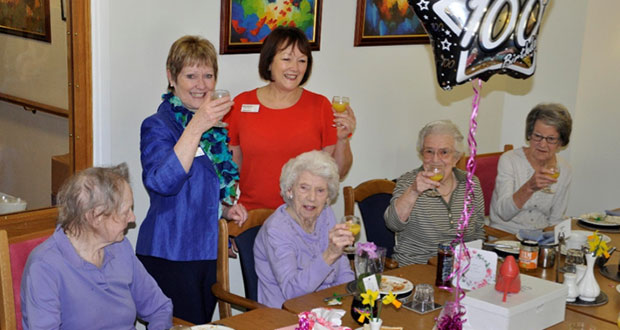 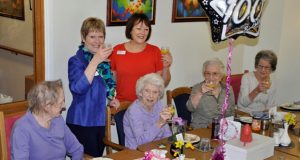 A World War Two army corporal and singer called Vera has celebrated her 100th birthday at a Salisbury care home just ahead of namesake and former forces sweetheart Vera Lynn.

Like the famous 1940s music icon, great grandmother Vera Gorringe was born in March 1917 and has had a life shaped, at least in part, by war.

Her birth, in the north-east shipbuilding town of Hartlepool, was just over two years after a German naval bombardment killed 130 local people and injured hundreds more as World War One got under way.  It was an experience that scarred the community for years, even though she recalls a happy childhood.

Now living at Colten Care’s Braemar Lodge in Stratford Road, Vera said: “My earliest memory is being on the beach with my mum paddling in the water. I remember saying it was too cold and couldn’t someone warm it up.  We practically lived on the beach as children and I think the sea air has hardened me.”

She initially worked in a bakery and then, with work difficult to find in the 1930s, moved to the West Midlands to take up a post as a machinist making wireless valves for television.

Vera’s World War Two army service included two years stationed at Dover Castle in Kent. She slept in the keep and could hear planes flying over at night on their bombing raids and German shells exploding in the distance.

She gained the rank of corporal in her training regiment while in Preston, Lancashire, and sang at concerts with a band.

Vera said: “I was never professional but we had a professional drummer and other musicians. We were always around playing concerts and I once even sang at the Preston Hippodrome. I enjoyed singing, not that I dare to do it now.”

Vera met her future husband George at a dance and married the ex-RAF man after the war ended. She has five daughters and a son, 11 grandchildren and one great granddaughter.

Asked for the secret of her longevity, Vera said: “Keep a nice home together and do your best for people. I am not one to join clubs but I do have lots of friends. Also, I’ve taken cod liver oil every day for years and that does me a lot of good.”

One of her lifetime highlights was a special treat from the children: a trip for her and George on Concorde to celebrate their 40th wedding anniversary in 1988.

Vera, who is one of six centenarians at Braemar Lodge, celebrated her 100th birthday with a party at a daughter’s home in Amesbury and a champagne breakfast with fellow care home residents. One of her presents was a novelty chocolate styled in the shape of a high-heel shoe. “That went down very well,” she said.

Braemar Lodge Activity Organiser Sylvie Rodulson said: “While Vera Lynn will no doubt get a great deal of national attention with her 100th birthday later this month, it was lovely to help our Vera mark her centenary. There were smiles all round.”