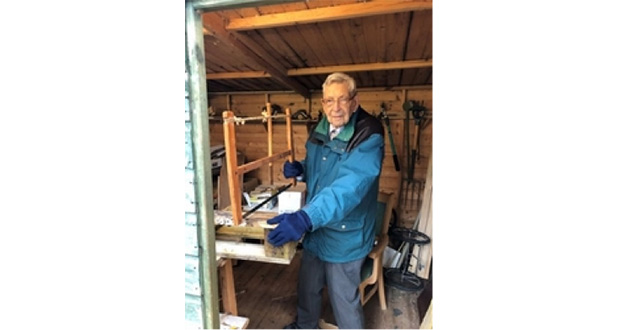 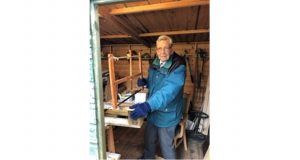 Bob Weighton, the oldest man in England, celebrated his 111th Birthday on 29 March 2019.

He celebrated with his friends and fellow residents at Brendoncare Alton, where a birthday party was organised for him.

Children from St Lawrence CE Primary School in Alton performed some songs from 2.30pm, followed by the cutting of his birthday cake.  Also, Bob officially launched his new book of poems and recited some of the poems during the party. Proceeds from the sale of his books will go to charities who work with the elderly in Alton.

Bob Weighton, said, “I am very lucky to have been healthy and active throughout my life. I enjoy social activities and like to get outside every day. I have a shed in the garden at Brendoncare where I enjoy making toys and children’s furniture.”

Bob was born on 29 March 1908 in Hull, Yorkshire, where he lived and studied for a degree in mechanical engineering. After his studies, he worked in marine engineering in Northumberland.

In 1933 he decided to volunteer to teach English in Taiwan. He spent six weeks on board a ship reaching Hong Kong and a further week getting to Taiwan. He initially spent two years learning Japanese, and then taught English in a school for four years, during which time he married his fiancée who came out from England in 1937.

When warnings of Second World War were made in 1939, he decided to leave for England. However, on the way across the Pacific to Canada, war broke out and he lived in Canada and USA until the end of the war.

During the war, he worked with the British Government, first inspecting aircraft engines for delivery to the RAF, and then translating enemy broadcasts and preparing programmes in Japanese to be broadcast to Japan under the title of the ‘Voice of Britain’.

He returned to England in 1946 with his wife and three children. He became a lecturer in mechanical engineering at the City University of London, where he continued working until his retirement in 1973.