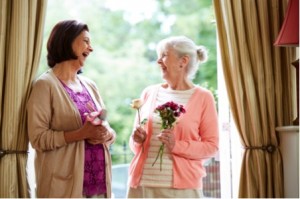 Laughter, non-stop activities and mouth-watering home cooking are just some of the things older people love best about housing and care charity, The Abbeyfield Society.

The Abbeyfield Society, which has over 500 houses and homes across the country in which 8000 older people enjoy living in a supported, companionable atmosphere, carried out a survey in the run up to Valentine’s Day asking its residents what they love most about being a part of the Abbeyfield family.

For 91-year old widower William Rae who lives at the charity’s Tullis House near Dundee, Abbeyfield was the lifeline he needed after losing his wife of 56 years.

William, whose health was in decline following the death of his wife, June, moved into Abbeyfield’s house in Monifieth for a respite stay. But the former postman loved his time at Abbeyfield so much – and in particular one of its members of staff, he’s become a full time resident there and writes daily poems about living with Abbeyfield, which has given him a new lease of life.

William has forged a close bond with house manager Karen Davies, who he says ‘helped to save his life’

‘She listens to me, she cooks for me and we have such a laugh together,’ says William.

For others, it is Abbeyfield’s eclectic range of activities and events designed to make older people’s golden years their happiest and most fulfilled.

And this Valentine’s Day will see Abbeyfield houses across the UK celebrate Valentine’s Day with activities ranging from the launch of a Valentine Pond for wildlife loving residents in Ipswich, Rom-Com days with romantic film screenings along with stacks of chocolate and a glass of wine or two at Abbeyfield Conwy while at Abbeyfield’s Ewell house in Surrey, residents will be sharing some special love notes dedicated to their home from home.

Joanne Painter is a senior house manager at Abbeyfield House in St Helen’s, Merseyside where residents will be also be celebrating this Valentine’s Day.

Said Joanne: “I love the whole ethos of Abbeyfield and seeing our residents bloom and gain confidence. Abbeyfield homes are happy, loving places which open up a whole new world for older people who might have lost their confidence living alone or as a result of becoming increasingly frail or vulnerable.

“We envelope our residents in love not just on Valentine’s Day, but every day, to keep them smiling all year around.