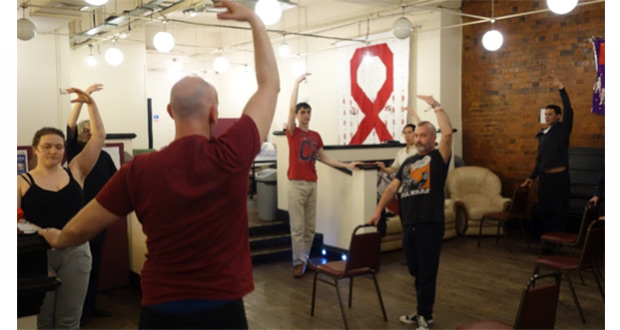 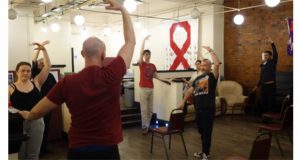 Ageing Better in Birmingham is part of Ageing Better, a programme set up by The National Lottery Community Fund, the largest funder of community activity in the UK. Ageing Better aims to develop creative ways for people aged over 50 to be actively involved in their local communities, helping to combat social isolation and loneliness. It is one of five major programmes set up by The National Lottery Community Fund to test and learn from new approaches to designing services which aim to make people’s lives healthier and happier.

Patrick Chan, who runs “Sprung”, set the group up after taking part in the “Move in Movies” programme, a 12-week long dance participation project for LGBT people, delivered by Birmingham Royal Ballet in partnership with Birmingham LGBT.

Patrick wanted to empower adults of different ages and genders to come together through the joy of dancing, and having people with mixed abilities buddy up for peer-to-peer learning.

Patrick explained that learning dance techniques can help build confidence and reduce isolation in the future, saying: “It’s a stimulus for doing other physical and social activities, the whole idea is about forming new friendships and social connections, and overcoming stereotypes about ageing and isolation.”

Sue Hayward, 69, from Harborne has been coming to the dance group for 6 weeks. When her friend wasn’t able to come to Sprung, Sue didn’t feel like going either. But she plucked up the courage and found that everyone was welcoming and friendly. “We’re all in the same boat, and it doesn’t matter if you don’t know how to put one foot in front of the other,” she says.

“It’s been good for socialising, and mentally it helps to laugh, and it’s something to talk about.”

Sue was having issues with a shoulder she had dislocated some time back. Doing gentle exercise has really helped, and she enjoys the company. “It would’ve been rubbish just sitting at home in front of the TV; I much prefer coming here!”

It’s important for older people to stay connected to their local community. Sue explains: “Retirement means boredom for a lot of people: sitting at home and doing nothing. Being alone by yourself and nothing to talk about. No thank you! I didn’t want that for me, I wanted a feeling of being alive, and Sprung has helped me get out and about!”

Sprung presently holds dance classes at the Positive West Midlands venue in Birmingham city centre and organises theatre trips so there is something for everyone. For more information, drop a message to sprungdancers@gmail.com or head over to Sprung’s Facebook page www.facebook.com/groups/2166434043644004/