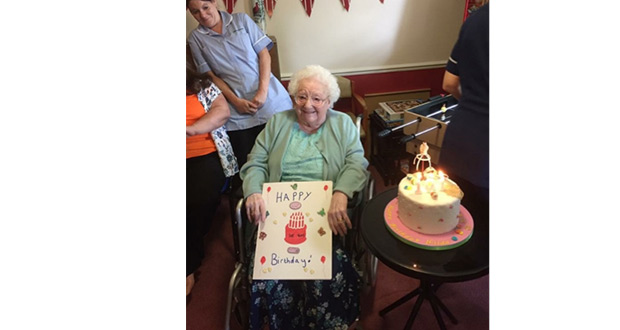 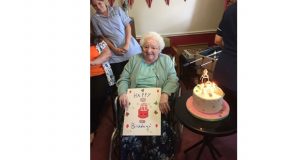 A resident at a care home in Worcester has celebrated turning 101 with a party organised by staff.

Hilda Newman, who lives in Shaw Red Hill care home, was joined by her two sons, Martyn and Alan, as well as residents and staff for an afternoon tea party in the garden, with a seamstress themed cake that was made by one of the nurses.

Hilda grew up in Stamford in Lincolnshire with dreams of working in the dress making trade. On completing her training, she qualified for the job as a Lady’s Maid to the Countess of Coventry at Croome Court, where she worked for over ten years. It was here where she met the chauffeur, Roland, who later became her husband.

It was Hilda’s unique insight into one of Britain’s most noble families that allowed her to write her memoirs which were later published in her book, “Diamonds at Dinner: My Life as a Lady’s Maid in an 1930’s Stately Home”.

Hilda, who moved to Shaw Red Hill in January said: “I feel so glad, you can’t complain when you get to 101.”  When asked what her secret to long life was, she said you must “always work hard, and enjoy life at every chance.”

Hilda enjoys getting involved with the wide variety of activities at Shaw Red Hill, especially baking and seeing everyone else enjoy what she has made.

Dulcie Turner, home manager, said: “Hilda has led a fascinating life and we all love to hear about it here at Shaw Red Hill. It was an honour to be involved in her celebrations for this milestone birthday and we look forward to the next.”

Shaw healthcare provides a spectrum of services from comprehensive care packages through to low level support in the community for older people and adults with physical, sensory or mental health support needs.