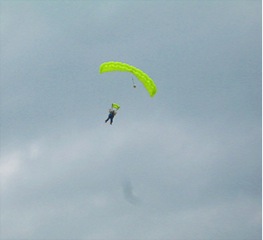 Lee Garratt and Alan Johnson from Nottingham took a giant leap of faith on Friday (26 June) when they completed tandem skydives at Langar Airfield, near Nottingham, to boost funds for Alzheimer’s Research UK.

Lee and Alan agreed to the jump after their friend Penny Brown asked them to stand in for her and her mum, Joan, 82, after they both experienced health issues just weeks before their scheduled jump and were advised not to take part. Penny and Joan hope to raise over £1,000 for Alzheimer’s Research UK after their dad and husband, Jim, 82, was diagnosed with Alzheimer’s disease 18 months ago. The family will also be donating funds to The Lincs and Notts Air Ambulance and The Liver Association at The Queen’s Medical Centre in Nottingham.

“When dad was diagnosed it was a shock to us all. Dad had become quite forgetful but none of us expected Alzheimer’s disease. It has progressed quite noticeably since his diagnosis and has had a huge effect on Mum who is now having to learn to do all the things that Dad used to, like handling their finances and paying the bills.

“There are no treatments that target the disease processes of Alzheimer’s disease but Dad is taking part in a drug trial which he is taking comfort from as he feels he is doing something that may change the future for people receiving this diagnosis. Mum and I wanted to do something too which is why we decided to take part in a tandem skydive. Mum was on her way home from her GP after being given the all clear to do the jump when she fell over and broke her arm. Around the same time I was diagnosed with fibromyalgia, a condition which causes pain all over my body and I was also advised not to jump. We were really disappointed but luckily our good friends Lee and Alan love a challenge and took little persuading to step in for us.”

“We knew how much Penny and Joan were looking forward to completing their skydives so when Penny told us they weren’t going to be able to do it we didn’t have to think twice about helping. Alzheimer’s is a cruel disease and we have seen the effect it is having on Jim and Joan so we were more than happy to help.

“It was very nerve-wracking in the plane but the freefall was exhilarating and then once the parachute was open it was actually very peaceful.”

“We are very grateful to Lee and Alan for taking on this challenge and to Penny and Joan for coming up with the idea. Penny is still collecting the fundraising money but already has raised over £1,500. Every penny raised will help provide crucial resources for our scientists and fund pioneering research, driving the next breakthrough.