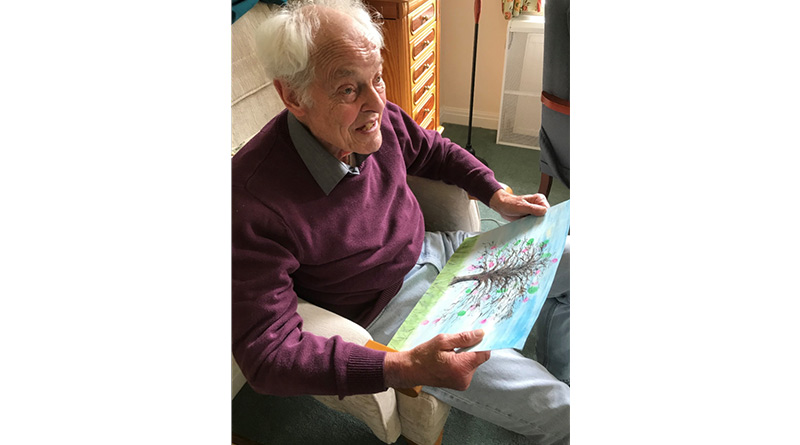 The orangery wall at The Hall care home in Thornton-le-Dale has been decorated with a new community painting thanks to help from a local artist.

The artwork, which has been named ‘The Tree of Life,’ was created by June Appleton, the home’s visiting artist, with a helping-hand from residents and staff at the North Yorkshire care home.

The painting depicts a tree in a field with leaves and blossom growing on its branches. It was painted by June, with finishing touches supplied by the residents and staff at The Hall.

Using finger-painting techniques, residents added their fingerprints to the painting, forming pink blossom on the tree’s branches. Staff members also added their fingerprints to the painting, creating the effect of green foliage around the tree. Each resident was given the opportunity to contribute to the artwork, adding their own unique markings to the picture.

The artwork, which includes a contribution from every staff member and resident at The Hall, has already received many compliments from people at the home and has proven extremely popular on the home’s social media page. Staff at The Hall have stated that they are looking at ways they could put postcards and mini prints of the painting up for sale, with the proceeds going to Dementia Forward; a local charity that provides support and information to people that have been affected by dementia.

June, whose mother and mother-in-law both live at The Hall, said: “I’m delighted that the painting has been so popular. It has been really special involving residents in the design, chatting to them, and finding out about their life so that every fingerprint has a story to tell.

“The painting we produced is truly unique and is a fitting tribute to the community feel at The Hall.”

Diane Hagan, home manager at The Hall, said: “The residents really love June’s artwork and are always complimenting the paintings and creations she has done for our home. It was brilliant that we were able to come up with a concept that everyone could get involved with.

“Not only was the tree of life painting great fun to make, but it also looks fantastic. Hopefully, we will be able to work with June to produce more projects like this in the future.”