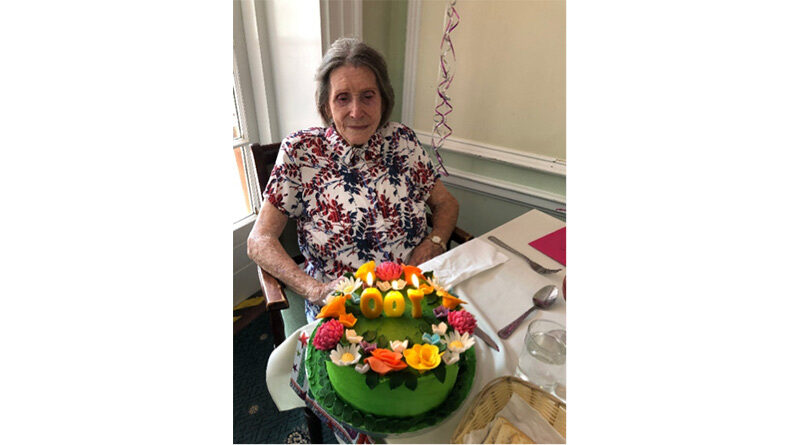 A resident at The Manor House care home in North Walsham, Norfolk, has marked her 100th birthday with a special celebration at the home.  Irene Vincent has been living at The Manor House since 2018 and reached her milestone birthday on Wednesday 5th August.

Irene was born in Birmingham in 1920 where she went to school before working for the Cadbury Brothers at the age of 14.  She met her husband, Ernest, when he was working for the Post Office, however before they could get married, he joined the British Army’s 7th Armoured Division – known as the Desert Rats. Here, he was posted to France during WW2 and took part in several campaigns.

They married in December 1944 when he was home for a short period of leave, sharing their special day in a double wedding with her sister.

Whilst Ernest was away at war, Irene volunteered for the Red Cross, working with injured servicemen and was a fire watcher in the centre of Birmingham.  Ernest returned home and to his job at the Post Office after the war ended, and in 1946 they had their son, Barry, who would eventually give them two grandchildren and four great grandchildren.

Irene received a congratulatory card from HRH Queen Elizabeth, as well as a special cake decorated in beautiful flowers and has enjoyed some pampering from The Manor House team, with a member of staff offering to come in on her day off to do her hair and nails.

Home Manager of The Manor House, Paula Pawsey said, “It was an absolute delight to be able to treat Irene to some special pampering to mark her milestone birthday. We hope she enjoys her beauty treatments and her cake, and on behalf of everyone at here at The Manor House I’d like to wish her a very happy 100th birthday.”