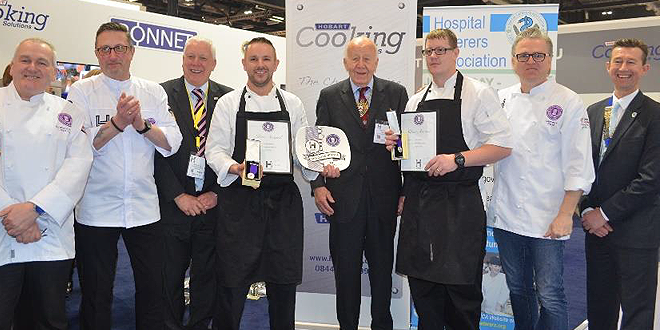 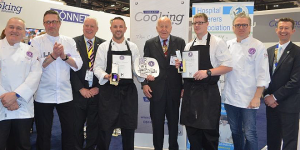 Each chef team had one hour to cook a beef-based two course hospital meal in front of a large crowd at the live theatre Hotelympia, in the coveted Salon Culinaire HCA Hot Cookery competition.

Kirton and Cannon of North Tees won with their main meal of pot roasted beef cheeks served with vegetable and creamed horseradish mash and rhubarb and custard with Italian meringue tart for dessert.

“We are so pleased and surprised to win today, especially looking at the high standard around us. It’s our fifth time entering but the standard has got so much higher.”

We tried the main with several cuts of beef to see which would perform best under the time limit. It’s very hard to produce slow cooked beef in just one hour. For example the pressure cooker takes 10 minutes just to pressurise, so that’s valuable time given away before you have even started.”

And Colin Chapman, Head of Catering for the Trust who was on hand to support the team comments;

The team came in just under budget at £2.08, and we are thrilled they have won such a coveted award. The winning recipes will most certainly go on the menu at the hospital, starting with a trial in the restaurant”

“We are tremendously proud of the high standard and quality of this year’s competitors which seems to improve year on year.

New recipes have a huge impact on hospital kitchens but many staff don’t have the time or resources to try out new things. This competition showcases recipes which by the nature of the competition rules will be compliant and ready to use within NHS kitchens nationwide.”

The Hospital Caterers Association (HCA) competition, sponsored by Hobart Cooking Solutions and The Worshipful Company of Cooks, was judged by five prestigious Salon Culinare chefs. No allowance was made for the hospital background and all entries were judged on restaurant quality dining.

“Year on year we have seen huge improvements in the HCA hospital chef competition. This year in particular I was very impressed with the hygiene and cleanliness in the way they worked, proving this is really high on their agenda. It’s absolutely marvellous that hospital chefs can compete at restaurant level, judged by award winning chefs.

Of the winners he said;

“The judges were unanimous in their decision. The beef cheeks had good taste texture and presentation and with a few tweaks could have been awarded Gold.

It’s the hardest job in the world to feed people that don’t want to be fed. These guys here today have certainly raised the bar of hospital cooking. The piping on the meringue dessert was excellent.”

And Judge Steve Oram followed up:

“It’s so hard to produce flavour with the salt and fat restrictions hospital caterers are under, but the Chefs here used their skill to bring out the flavours with herbs and good ingredients. If North Tees’ could have cooked the Ox cheeks just a bit longer and reduced the jus to make it sticky and glossy it may have tipped Kirton and Cannon into Gold”

The competition seeks to showcase best in class hospital catering and to highlight the constraints and unique environments that hospital chefs have to work under, producing scaled up dining every day. A thought echoed by multiple award winning Judge Chef Hayden Groves:

“It was a great day, one which really showed the industry and the HCA at its very best. We have supported the event for over ten years and look forward to continuing our partnership with the HCA”