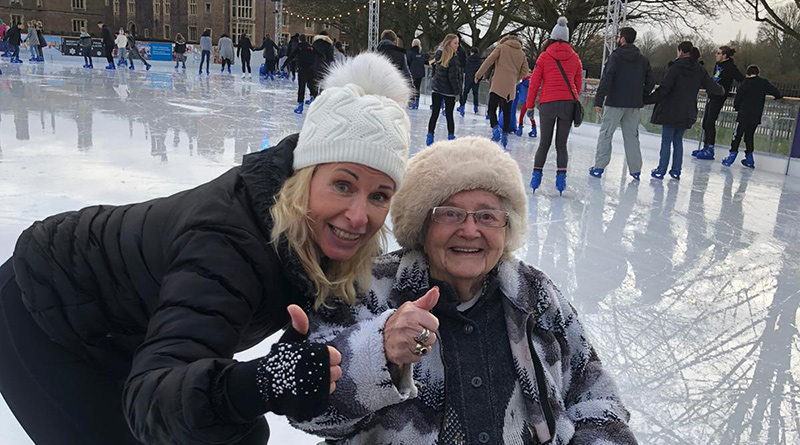 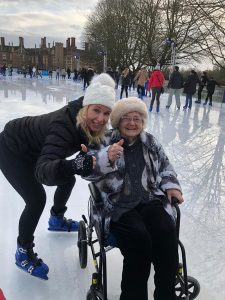 A group of senior care home residents – including one in her 90s – and staff from CHD Living’s White Gates Nursing Home wrapped up warm for a festive afternoon of ice skating at Hampton Court Palace this week, helping to fulfill their wish to return to the ice.

On Thursday 19th December 2019, residents Edith Hutchinson (94), Larry Evans (79) and Bob Jones (81) travelled from their nursing home in Laleham-on-Thames to Hampton Court Palace Ice Rink, one of the most scenic rinks in the UK.

Offering visitors the chance to glide across the ice while surrounded by spectacular views of the historic Tudor palace, the rink was chosen especially by CHD Living staff for its ability to accommodate wheelchair users, and because they felt it provided the best atmosphere for stimulating the residents who are living with illnesses such as Parkinson’s, Alzheimer’s and Dementia.

Hana Nieuwenhoff, Manager of CHD Living’s White Gates Nursing Home, said: “At White Gates we work hard to ensure residents are provided with a diverse calendar of activities all throughout the year. We think this is especially important at Christmastime and so are committed to helping our residents get as much enjoyment out of the festive season as possible, regardless of any perceived limitations.

Edith, Larry and Bob were overheard reminiscing about how much enjoyment they used to get from ice skating, so we decided to surprise them with a day out at Hampton Court Palace to relive these fond memories. It was wonderful and incredibly heart-warming to see them on the ice again after so long, and to witness how much joy the trip brought them.”

Speaking of his day out, Larry said: “Today has brought back such special memories of when I used to go ice skating many years ago. We’re very grateful to the staff at White Gates for arranging such a lovely day out for us.”

Edith added: “Larry, Bob and I have often discussed how much we enjoyed ice skating when we were younger, so to be given the opportunity to do it again has been truly wonderful – a really lovely Christmas present.”