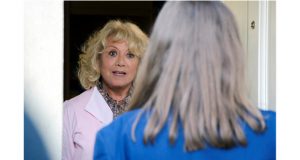 A North East-based charity has been selected as the national partner for a new short film drama to help raise awareness of the effects of dementia.

Dementia Matters (previously known as Dementia Care) has been confirmed as the official partner of Horsham-based Fact Not Fiction Films for their upcoming short film, ‘Missing a Note’.

Filmed on location at Farlington School in West Sussex and starring Game of Thrones actor, Ian McElhinney, musical theatre legend, Elaine Paige OBE and 11-year old rising star, Darcy Jacobs of Les Misérables West End fame, ‘Missing a Note’ tells the story of schoolgirl, Molly Groves (Jacobs), as she sings before opera legend John O’Connell (McElhinney) in the hope he will write her a good scholarship report. However, John’s diminishing short-term memory means that Molly is in for a few puzzling surprises.

The funds required to produce the film are being entirely crowd funded, with all profits from the sale and release of the film going to Dementia Matters.

“We are absolutely delighted to be partnering with Fact Not Fiction Films on this project.

“Despite its commonality, there is still a lot that we don’t understand about dementia and the effect that it has across all aspects of a person’s life. We are always pleased to promote any work which furthers the understanding of dementia and approaches the topic in new and creative ways in order to reach out to new audiences.

“To have the support of stars such as Elaine Paige is absolutely incredible and we are very much looking forward to seeing the finished film. We really can’t thank Fact Not Fiction Films enough for their outstanding support of our small charity.”

Tristan Loraine, producer at Missing a Note, commented: “We’re delighted that our short film ‘Missing a Note’ is partnering with Dementia Matters. With dementia being a key topic at the heart of the film, we are pleased to be able to offer any profits generated to Dementia Matters to support the important work they do.”

From its base in Newcastle Upon Tyne, Dementia Matters provides specialist care, support and advice to people living with dementia, their families and carers. The not-for-profit organisation, which recently celebrated its 25th anniversary as a registered charity, delivers a variety of services including residential, respite and day care and advice and support, to over 300 service users across the North East.

The public can support and get involved with the ‘Missing a Note’ short film project in a number of ways by visiting the official website at www.missinganote.com or www.gofundme.com/missinganote