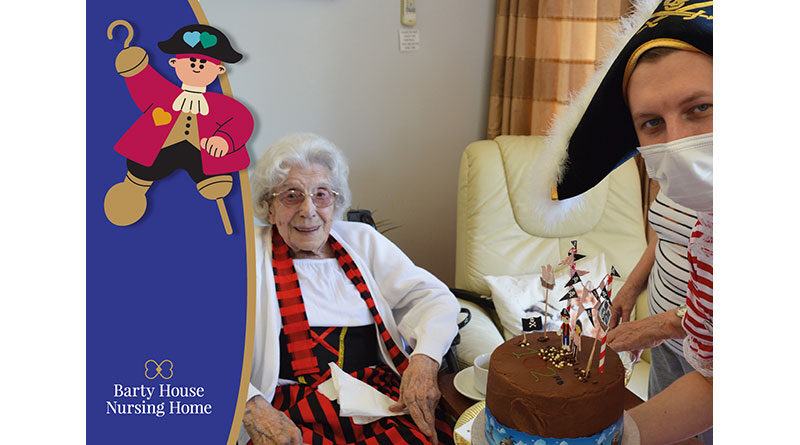 It’s not every day that someone turns 102, and it’s even more unusual to ask for a pirate-themed birthday party. But that’s exactly what our resident Irene Nobbs did when she recently celebrated her 102nd birthday, with new manager David Willis and the staff at Barty House Nursing Home.

Irene, who was born in 1919, has lived a long and interesting life. She’s seen off the ‘roaring’ twenties, the Second World War, the ‘hippy’ sixties, the millennium and, most recently, the pandemic! The young Irene grew up in Greenwich and trained as a hairdresser with her sister. When the sisters’ salon closed during the war, Irene became a special needs teacher. She and husband Lenard had two daughters – Suzeen and Diane – and a son, Robert. Irene also has a grandson and two delightful great-grandchildren.

She loves travelling, photography and writing, and is an enthusiastic participant in the activities here at Barty, especially music and those “that work your brain”.

“Barty House is smashing and a lovely home. They give you great care here,” she says.

Irene also loves pirates, which is why she asked for a pirate party. Our staff all entered into the spirit of it and dressed up as loveable pirates – with not a scary peg leg or parrot in sight! Everyone enjoyed a tasty buffet, pirate and dancing, not to mention a delicious homemade chocolate cake baked especially for Irene. “It was such a wonderful day that I will always remember!” she says.

Among the Barty House ‘pirates’ was new home manager David Willis, who has recently rejoined Canford Healthcare after spending a year managing a nursing home in Gillingham.

After spending 20 years as a banker, David took the momentous decision to return to university and qualify as a mental health nurse. He initially worked out in the community, helping people with substance misuse issues, and then moved into caring for the elderly. David performed a number of senior roles, including clinical lead, deputy manager and peripatetic manager for several Canford Healthcare homes, demonstrating versatility and commitment at all times. He left the company a year ago to manage a nursing home in Gillingham but is very pleased to be back with us, working alongside deputy manager Donna Barks and the rest of the Barty House team.

David is passionate about delivering the highest quality of care for residents. He says: “I am delighted to be working at such a lovely home as Barty House and am looking forward to putting the home at the very heart of the local community.”