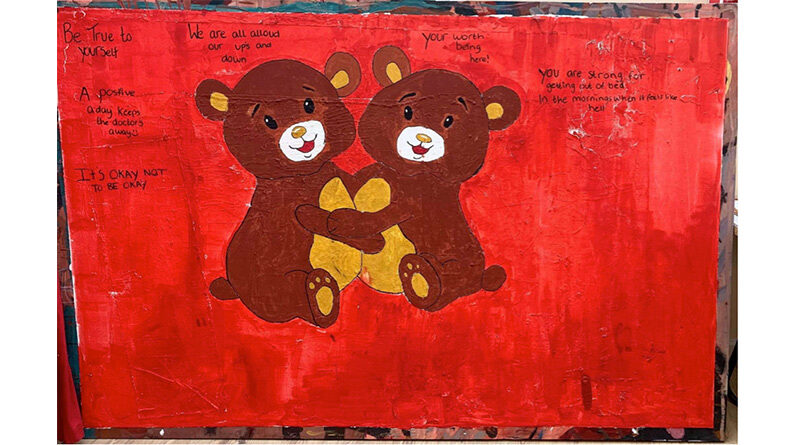 Some of The Guinness Partnership’s younger residents from supported housing in Gloucester recently took part in the ‘Canvas Art Project’. The project was a joint initiative with Rooftop Housing, Artspace and Tewkesbury Borough Council, which aimed to help keep younger residents occupied during lockdown, promote their mental wellbeing, and teach them new skills.

Health and wellbeing support is an essential part of what we do and during these difficult times, and we know that young people have been finding the pandemic particularly difficult.  The residents in our Young Person’s Schemes have been channelling their emotions into art. After many weeks of hard work and creative effort, the Canvas Art Project came to an end with everyone receiving well earned awards in a virtual showcase exhibition.

A resident, aged 20 said: “I really enjoyed taking part in the Canvas Art Project. I produced a painting to show that it is okay not to be okay and that we all need a hug sometimes. I wanted to include some positive quotes surrounding mental health.”

Derry Cleaton from Rooftop Housing Group said: “I thought this was a positive activity for the residents, as it allowed them to focus their mind on something during a very difficult time in the year. They were able to create beautiful works of art, which I’m sure they will be proud of for years to come.”

This project has been such a success for all involved and it’s hoped that further projects can follow in the future.  Creative outlets can be extremely beneficial to health and wellbeing and the young people in our schemes have benefitted at this difficult time.

Why not take a virtual tour of all the artwork created by residents in the video created specially by Artspace.