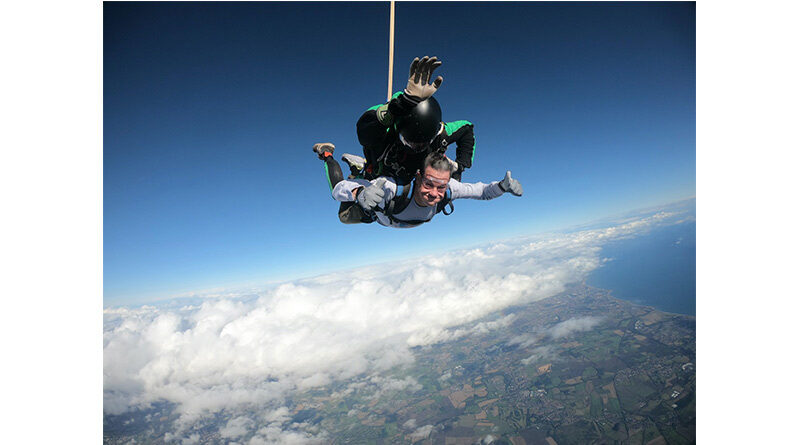 Mike Cleasby quality director at National Care Group has faced his fears to plummet from 16,500 feet, raising a fantastic £2,000 by skydiving for two charities close to his heart.

Mike selected Teeside Hospice and Macmillan as worthy beneficiaries of the jump, which he undertook in memory of his parents and in recognition of the hard work and resilience shown by care workers during the pandemic.

Mike dedicated his jump to his mother who sadly passed away earlier this year following his first skydive seven years ago on behalf of his father. Having lost both parents to cancer, Mike said he wanted to find a way to give back.

The feat was made all the more impressive by Mike’s fear of heights, and the fact that the jump came from 6,500 feet higher than initially planned due to poor weather conditions.

Mike said: “Well, my thoughts were that a skydive would at least be shorter than doing the London Marathon! I am actually not very good with heights, and the cold air and strong winds took my breath away.

“But I think this type of achievement brings home the message home that we are all stronger than we think. Sometimes when you’re up against it and even when you’re afraid, you just have to remember you’ve got a bit more in you. Especially if it means helping others – which I know everyone at National Care Group can relate to.”

Mike enlisted the help of Peterlee Parachute Centre in County Durham where he was able to take in the view of the city and cathedral below, before the thrilling jump.

“The National Care Group team has been amazing – they had a shirt designed for me that I wore on the day and have been overwhelming in their sponsorship” he added.

“I couldn’t have asked for more. It has also helped bring some closure and reflect on a positive experience. Even at our worst times, we can all dig a little deeper, and the resilience from colleagues during the past couple of years has shown that.”

James Allen, CEO at National Care Group, said: “Giving back is something embedded within National Care Group’s ethos, so it brings me a great sense of pride to see how the team is doing that outside of work. What Mike has achieved in memory of his parents and in recognition of our amazing team is wonderful and it is testament to his role as quality director. It was great to see the support of colleagues, who all got behind Mike in his fundraising and celebrated this achievement.”