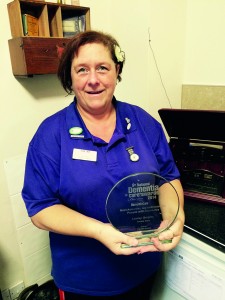 She was presented with a trophy by stand-up comedian Paul Sinha at a gala night in Brighton attended by more than 600 people.

The judges said they were hugely impressed by Lesley’s care and professionalism.

Lesley, 49, a mother-of-three who has worked at Addison Court for four-and-a-half years, said: “This award means everything to me.

“But what really inspires me are the simple things – like a resident smiling. I get tremendous satisfaction from my job. I want to do for residents what I would want for my own parents.

“My own grandmother had dementia, and I have worked with elderly people since I was 16.”

Addison Court home manager Anne-Marie Potter said: “Lesley typifies the quality of care to which we aspire at Addison Court. She is outstanding at what she does, constantly imaginative and innovative, and we could not be prouder of what she has achieved.”

The home is no stranger to awards.

Last year Lee-Anne Aldren was named ‘Housekeeper of the year’ at the National Care Awards after judges said she ‘clearly understood the importance of making everyone feel special’. The home also received two nominations in the Great North West Care Awards in 2013. The whole team was runner up in the Care Team category while Lesley Quigley again triumphed in the Care Home Activity Organiser Award for an ‘abundance of original activity ideas based on spontaneity and person-centred care. This year there was a nomination in the 2014 Great North West Care Awards for maintenance worker Lee Blakely.

Adrian Pancott, CEO of Amore Care, part of the Priory Group of Companies, said: “This is another example of why Amore is now recognised as the No 1 provider in the older people’s care sector in the UK.”

Stephen Amos, Amore’s Dementia Lead, said: “The National Dementia Care Awards 2014 was a fantastic night celebrating great achievement in dementia care and the high esteem in which Amore, and Creative Minds, is held. Our continuing commitment and drive for the highest standards means Amore is recognised as a centre of excellence.”

Creative Minds is a dementia care programme accredited by the University of Brighton which aims to support people with dementia live their lives to the fullest. It also helps the relatives of those with dementia understand the condition and its impact of them and the person with dementia.