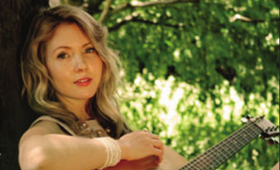 Musical artist Beatie Wolfe has visited Anchor’s Heathside care home in Woking as part of a research project, entitled The Power of Music, exploring the positive impact of music upon people living with dementia.

Influenced by the work of neurologist Oliver Sacks, Beatie Wolfe, Kevin Gavaghan of Spirit of Creation and 20/20 Research, launched this project to assess the reaction of people living with dementia to music and have been performing at care homes around the country over the last few months.

Singer-songwriter Beatie performed a variety of her own songs for more than 30 residents at Heathside on 18 May, many of whom are living with dementia.

Asa Johnson, Customer Engagement Advisor for Anchor said: “It is fantastic for us to be working with Beatie, as the ‘Power of Music’ research is something that works alongside the work Anchor are doing in providing the best care and support for people living with dementia, such as Anchor Inspires.

“What is really interesting about the work that Beatie is doing is that she is using unfamiliar music to develop our understanding of music and the impact it can have on people living with dementia.

“It was really powerful to see residents here at Heathside engage with Beatie’s music, from clapping their hands and tapping their feet, to humming along to the tune, or talking to each other. For some residents living with dementia, music is a fantastic way of communicating and expressing themselves, and that has been evident here today at Heathside.”

Beatie Wolfe commented, “While performing ‘The Power of Music’ tour for people living with dementia I have been lucky enough to witness some of the most powerful and positive responses to music I have ever experienced. Watching people becoming reanimated and bought to life before my eyes has been incredibly moving, and it has been truly fulfilling to be able to serve in this way: to uplift through my music.”

During each performance audience reaction to the music were recorded as anecdotes, footage and data. The research group say the early results, research study and documentary are hugely positive and provide data which could significantly alter the way people caring for those living with dementia engage and connect with them via music.