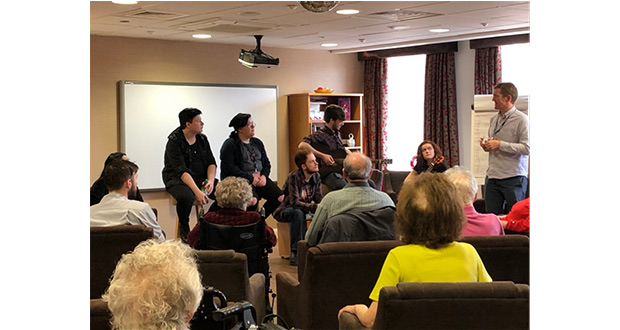 Music students at Cheshire College South & West have celebrated the culmination of a nine-month intergenerational initiative that has seen them become music therapists for people living with dementia at a Crewe care village.

The students, who are all aged 16-19, have been visiting the state-of-the-art Belong care village in Crewe twice a week to perform, with sessions tailored to the musical tastes and life experiences of residents and visitors.

To mark the end of the academic year and the success of the project, the musicians performed a celebratory concert for the Belong community at the college, with residents making up VIP guests amongst the audience.

The programme was developed by the not-for-profit care village operator and Cheshire College South & West, in collaboration with Cheshire East Council (CEC). The aim was to create a musical therapy initiative to support residents with health needs, such as dementia, while promoting interaction between people of different generations within the local community.

Belong Crewe experience coordinator Natalie Ravenscroft, who was one of the architects of the project, said: “We’ve witnessed lots of very positive responses from people attending the performances. Everyone has been more animated and interactive afterwards. People living with dementia who are unable to communicate in other ways have been tapping their feet and singing along, and some have even been dancing. For many, it has brought back lost memories, and as a result of conversations prompted by the sessions, we’ve got to know more about the people we care for.

“The benefits for the students have been evident as well. Apart from counting towards the work experience they have to undertake, they’ve told us that they are very grateful for the new perspective they’ve gained by engaging with people with dementia, which they otherwise wouldn’t have done.”

Commenting on the finale concert, Belong Crewe resident, Brian McLaughlin, said: “I absolutely loved it. The students are very talented, and the song choices were great. Some of the performances, including songs by Doris Day, took me back to some very happy times.”

Regardless of the outcome of the government pilot, the college has vowed to continue to work with Belong and include the project in its syllabus. This will start in the next academic year, and will involve music technician students recording bespoke playlists for residents of Belong Crewe and its day care customers.

Music therapies have become increasingly common in care settings as they have been shown to improve the mental and physical wellbeing of people living with dementia, including boosting mood, memory and cognitive abilities, as well as encouraging social interaction.