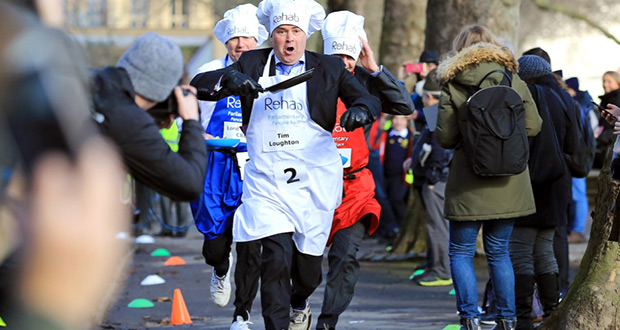 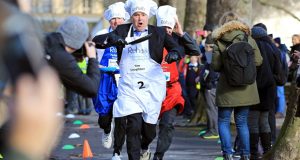 THE “eggs-factor” bootcamp is underway for one of London’s must-see annual attractions where MPs, Lords and members of the media ‘batter’ it out to see who will be crowned the Rehab Parliamentary Pancake Race champions.

The battle lines have been drawn for the 2018 Rehab Parliamentary Pancake Race, supported by Lyle’s Golden Syrup, which will take place at 10am on Shrove Tuesday, February 13, in Westminster’s Victoria Tower Gardens.

The relay race – which has been running for more than two decades – attracts hundreds of Londoners and tourists who flock to see the runners dress up in pinnies and chefs’ hats to raise awareness of the important work carried out across the UK by the Rehab disability charity.

Rehab provides training, employment, health and social care services to more than 6,000 disabled people and those at a disadvantage in the labour market. Members of the public wishing to support the work of Rehab’s brain injury services across the UK can visit www.parliamentarypancakerace.co.uk to donate.

The Lords and media teams were left with egg on their faces and feeling pretty ‘crêpe’ after the MPs’ team controversially scooped victory in the closing moments of last year’s race.

Among the well-known TV faces intending to show off their pancake-flipping prowess in 2018 are the BBC’s James Landale and Will Boden, Channel 4’s Michael Crick, and ITV News’ Romilly Weeks.

On the flipside, MPs, however, will not be content to sit on their pancake-tossing laurels and have their sights set on poaching victory for the third year running.

The race has clearly-stated “rules of engagement” which will be overseen by pancake race veteran Alastair Stewart OBE. The ITV newscaster has been named as the Race Official Starter.

Alastair Stewart OBE said: “I have been jostled by peers, tripped by MPs and sledged by Parliamentary supporters. In fact, I have flirted with a coronary. But, to be frank, enough is enough. This year I am delighted to hang up my hat and apron to be the Official Starter for the Rehab Parliamentary Pancake Race 2018. This way, I get the pride of place, prestige, and the power of high office without the aching lungs and sore feet. I will broach no cheating and will call out the bad whilst praising the good. I will award medals to the winners, a smile to the runners up and give wooden spoons to the losers. In truth, none are losers. It’s all a bit of fun for the great cause which is Rehab.”

Ruth Cadbury, MP for Brentford and Isleworth, is looking to settle some old scores and hoping the Lower House can make it three-in-a-row. She added: “So often in Parliament, we MPs are at each other’s throats, but the Rehab Parliamentary Pancake Race is an opportunity to show that we can come together for the right cause when that cause is beating up those rotten eggs in the media and, of course, supporting the Rehab disability charity! Shrove Tuesday is a day of penitence, and I hope that colleagues on the media team in particular will take the opportunity to atone for their many sins. As for the secret to MPs’ winning ways – well that’s easy. Our motto is most definitely to ‘Keep Calm and Flip On!’”

Gerald Mason, Senior Vice President, Tate & Lyle Sugars, has the perfect pancake topping. “We are absolutely delighted to sponsor the Rehab Parliamentary Pancake Race. Lyle’s Golden Syrup, made in the same East London factory since 1883, is one of the nation’s favourite kitchen staples. As the sticky-but-worth-it perfect pancake topping, we are very excited to have the opportunity to join the pancake-flipping fun. It is wonderful to be able to support a charity which has been providing care and support to those living with the effects of acquired brain injury, getting them back on their feet and back to work,” he added.