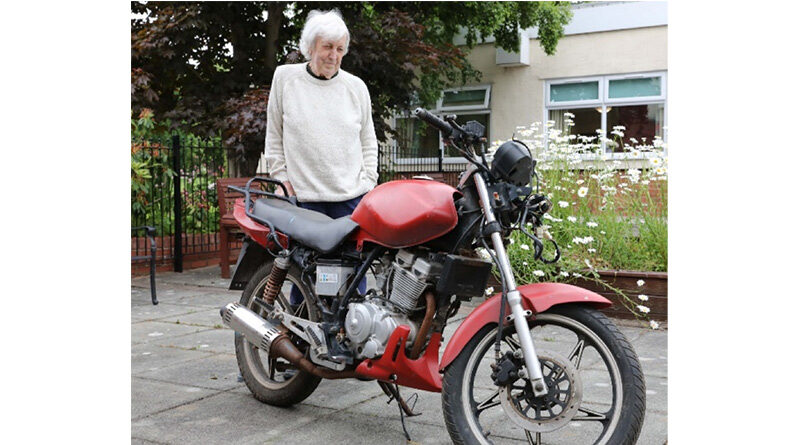 A motorcycle-mad care home resident is gearing up for a new challenge to lovingly restore an old bike.

John Wykes, 83, who now lives at Pendine Park’s Hillbury home in Wrexham, has a life-long passion for motorbikes and classic cars and has returned numerous ‘wrecks’ to their former glory.

Now he’s aiming to rebuild the Kawasaki motorbike that was donated after Shane Swift, the husband of Hillbury’s deputy manager Patsy Swift, put out an appeal on Facebook.

Shane’s big-hearted friend, Ian John, from Acrefair, came up trumps – even though his original plan was to sell it.

The home is now looking for specialist tools that John can use breathe new life into the bike.

Before retiring he was a professional joiner by trade, learning his craft at Harland and Wolff in his native Liverpool.

When he and his family moved to North Wales he opened his own joinery business, Marchwiel Joinery, near Wrexham, which he ran for many years.

But in his spare time John said his real passion was motorbikes. He taught himself the basics of vehicle mechanics.

He eventually became so proficient that he restored several vintage bikes, including a large silver coloured cruiser model.

Among his favourite projects was transforming a decrepit classic Vauxhall J type car, a model which was popular in the 1930s and 40s.

Hillbury manager Cindy Clutton said: “We cannot express enough thanks to everyone involved in this magnanimous gesture. To see John’s reaction when the motorbike arrived was heartwarming.”

“If anyone has any motorbike tools they can spare or no longer want then we’d love to hear from them. I’m sure John will take excellent care of them and put them to good use. He has motorcycling in his blood.

Cindy came up with the idea of looking for a motorbike for John to work on after leafing through his photograph album which is packed with pictures of motorbikes and cars he spent many hours restoring in his younger years.

She said: “He has good days and not so good days, but his face always lights up when he talks about his old motorbikes.”

According to John, his love of motorbike started after he started riding them when he was 16

He said: “I loved that feeling of freedom on the road, being out in the fresh air with the wind in your hair.

“It is completely different to travelling by car, although I did enjoy restoring classic cars too.

“The black J Type took me about two to three years to restore starting with the rusty old chassis and working my way up. I took photographs of it at different stages along the way. “The finished result was supremely comfortable, a lovely classic vehicle, which I took to a few classic car shows.”

Shane, who runs Swift Auto Services on Wrexham Industrial Estate, said: “Ian said he had been thinking about selling it, but when he heard about John at Hillbury he thought there was no better place for it to go. He was pleased to help out with such a thoughtful surprise for a veteran biker.”

Patsy said: “It is such a selfless gift which we know will bring a lot of pleasure to John and evoke many happy memories for him of his days on the road.”

John who has two grown up daughters, Colette and Kate, who both live in Wrexham, loves to reflect on old times working on his bikes and cars.

He said: “I would say to anyone that if you can keep active, keep your hands in good working order and put your mind and skills to use on a practical hobby then it will bring you lots of joy.”