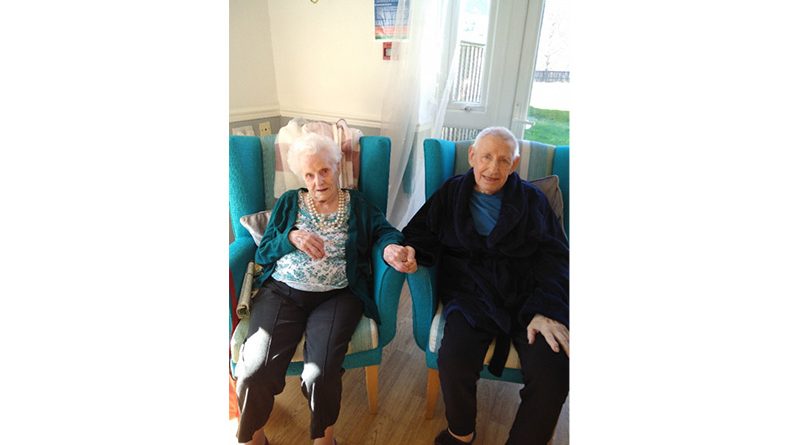 A mother and son have been reunited at White Rose care home, New Tredegar, after not seeing each other for two years because of ill health.

81-year-old Kenneth Dando moved into the care home on White Rose Way on 23 March so he could be closer to his mum, 104-year-old Nellie Dando. The staff at White Rose kept the secret until Kenneth moved in so it was a surprise for Nellie.

The move was triggered by the outbreak of COVID-19 as the home has put strict restrictions on visits to help reduce the risk of infection in the home. Kenneth didn’t want anything to prevent him from seeing his mum any longer, so he made the decision to become a resident at White Rose.

Kenneth is a former hospital porter at Caerphilly Miners Hospital and has two sons, Alyn and Robert. More recently, he was a carer for his wife Margaret who sadly passed away in 2019.

Nellie was always a housewife, dedicating her time to caring for her family. She decided to move into White Rose in December 2019 as she was worried about being alone at night.

Nellie said: “That’s the best surprise I have ever had in my lifetime! Thank you to the staff for making it happen.”

Kenneth said: “I don’t know how will I ever repay the staff at White Rose. Thank you so much.”

Jayne Coburn, home manager at White Rose care home, said: “When Kenneth moved in and we finally revealed to Nellie that he was here to stay, there was an overwhelming sense of joy in the home, there wasn’t a dry eye in the house!

“I’m so glad we could bring Kenneth and Nellie back together and I hope they enjoy living together again here at White Rose.”