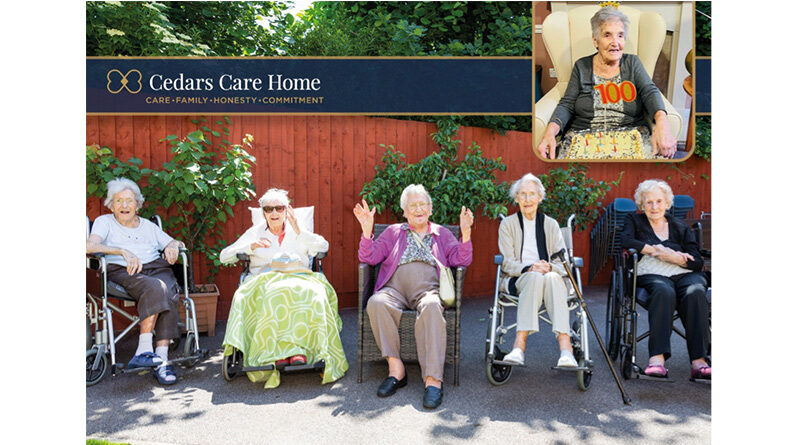 There must be something in the water in Southend-on-Sea, or perhaps just at Cedars Care Home. No less than five of the home’s residents have recently celebrated centenary birthdays – and above – while the sixth is on the cusp of turning 100!

Molly Hall will celebrate her 100th birthday early next month, following hot on the heels of Betty Ives and Olive Endersbee who both achieved their century in March and June, respectively. Doris Hand and Rose Lawson are now 101, while Elaine Atkinson is the oldest, at an impressive 103. The Cedars centenarians have been celebrating with lots of love, good wishes, cards and presents from family, fellow residents and staff, as well as scrumptious home-made cakes, candles and colourful balloons.

Each has an interesting tale to tell and can offer sage advice on how to live to a century and beyond. Betty grew up with her mother and brother, never knowing her father who had died. She was educated at boarding school, worked as a secretary then decided to retrain as a nurse and midwife. She spent several years at the British American Hospital in sunny Nice. Later she married Rupert, one of her patients, and lived happily ever after in nearby Canvey Island. Her secret for a long life? “To be happy, smile and laugh!”

Musical Olive started learning the violin aged eight and remembers playing with the Co-op orchestra at London’s Albert Hall. As a land girl during the Second World War she worked on a farm outside Chelmsford. Later she worked as a typist in London, got married and had a daughter. “I’m very lucky with my family,” she says, firmly believing that a happy family life is the secret of her long life. In retirement, Olive continued playing the violin alongside travelling, gardening and being an active part of the community.

Doris has been at Cedars the longest, arriving in April 2016. Her motto is “Be kind to one another and always try to be the best you can.” Doris’ Baptist faith is important to her, as are her husband and three children. She lived a lot of her life in Cornwall and nowadays loves scrabble and “exercising her little grey cells” while watching American detective drama ‘Father Brown’.

Rose had a varied career. During the war she worked in the Royal Enfield small arms factory, then a boot and shoe factory and later became caretaker of the office and apartment building where she and chauffeur husband Jack lived, in London’s West End. Rose’s work brought her into contact with many celebrities over the years which gave her great pleasure. Her secret to longevity? “Be happy, smile, have fun and enjoy life!”

Molly worked in a surveyor’s office where she met husband Reginald and went on to have five daughters – Sandra, Anita, Sue, Corrine and Natalie. Her aunt had a hotel in Brighton, which was great for family stays. “I had a wonderful life, a wonderful family and am very lucky,” she says. She ascribes her long life to her family, a love of big parties and living life to the full.

The eldest of the six, East ender Elaine loves ballroom dancing and playing bridge. She spent her career in finance and had three sons with husband Ralph. Elaine has vivid memories of the Second World war, and one night escaped an unexploded bomb with her mother and sister. The three grabbed their most precious belongings – ration cards (her mother) and love letters (her sister) while Elaine took her favourite dress. “It showed what was important to each of us at the time!” she says. She puts her own extraordinary longevity down to “good living and being happy”.