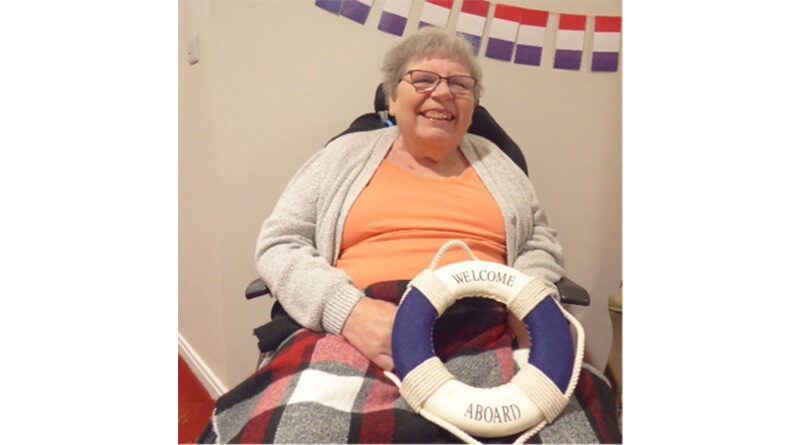 ‘Intrepid travellers’ at a Winchester care home have enjoyed a week-long European odyssey designed as a resident’s birthday treat.

Marion Stevens told staff at Colten Care’s Abbotts Barton that her wish was to go on a cruise when she turned 70.

In response, team members staged five days of themed activities for everyone at the home highlighting the food, music and culture of France, Spain, Italy, Greece and Denmark.

Clinical Lead Joby Varghese played the role of ‘ship’s captain’, greeting Marion and her fellow ‘passengers’ each morning, explaining the proposed itinerary for the day and sharing information about each country.

The Worthy Road home was decorated with national flags and bunting, taking in a new look each day as the ‘tour’ progressed.

On the first morning, Marion’s actual birthday, the destination was France so a croissant brunch was in order as she opened her cards and presents.

The cruise party sang Happy Birthday to her, raised a toast with glasses of champagne and went on to celebrate with cake at an afternoon ‘patisserie’ gathering.

The fun moved on to Spain the following day, with Spanish-related word games and quizzes followed by a colourful evening of tapas, dancing and sangria.

The third stop was Italy, featuring a gala lunch of pasta and pizza as diners were serenaded by carer Justyna Szymczak who performed a selection of Italian songs and some of Marion’s particular favourites by The Beatles.

Day four centred on Greece, with the opportunity for residents to get creative and paint pottery Greek-style.

The fifth and final day culminated in a visit to Denmark and the sampling of traditional Danish pastries homecooked by Abbotts Barton chefs.

Marion, who comes from Winchester, said: “I loved the whole week, especially my birthday. I thank everyone who put in the hard work to make it happen. It was great that other residents were involved and enjoyed it too.”

Resident Valerie Smith said: “I couldn’t believe how much thought and effort went into the whole week. The staff team were amazing.”

Companionship Team Leader Kirsty Sawyer said: “Everyone was pleased to wish Marion a very happy birthday and extend her celebrations for a few more days. We wanted to make Marion feel special all week and as we couldn’t take her on a cruise elsewhere, we decided the bring the cruise to her.

“Many of our residents have enjoyed cruises and ferry trips around Europe and so this was a great chance to rekindle memories and have some fun without even leaving the comfort of home.”