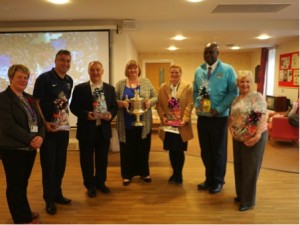 The footballers were guests of honour at The EachStep Blackley Dementia Café, a free monthly event that aims to support people affected by the condition. They took part in a special reminiscence session led by Colin Bridgford, Chief Executive of Manchester County FA, looking at the history of the clubs. They were joined by Sheila Crompton, widow of Manchester United’s legendary goalkeeper and coach, Jack Crompton.

As well as sharing fascinating stories from the football clubs – including tales of playing with and against legends of the game, such as George Best and Francis Lee – the group shared rare and unique footballing memorabilia. Guests at the session enjoyed holding the Manchester Senior Cup, a trophy dating back to 1885 that was first won by Hurst who defeated Newton Heath LYR who would later become Manchester United.

It is well recognised that reminiscence is fundamental to promoting the wellbeing of people who live with dementia, and for many sports fans their memories of sporting events are amongst their most vivid. As well as offering an exciting and stimulating experience for people who live with dementia, this session also offered family carers the opportunity to have fun and take time out from their important roles.

The event was created with the support of Dr Annabel Kiernan, Director at the Centre for the Study of Football and its Communities at Manchester Metropolitan University.

The EachStep Blackley Dementia Café is a free monthly event that offers people who live with the condition, and their loved ones, a fun and informal place to share their experiences, receive expert advice and relax. It takes place on the second Wednesday of each month, from 11am-1pm, and is completely free and open to the whole community.

EachStep Blackley is part of the national social care charity, Community Integrated Care. It delivers specialist residential and nursing dementia care. EachStep has been recognised as a national centre of excellence in dementia care, and has collected accolades at the National Dementia Awards and the National Care Awards in recent years.  Community Integrated Care has developed the Dementia Café in partnership with the charity Making Space.

Michelle Phillips, Manager of EachStep Blackley, says, “Football is so important to people in Manchester, so there are few better topics for us to cover at our Dementia Cafe. We were delighted to welcome Lou and Alex, as well as Colin and Shelia, to what was a fantastic event. This session reminded people of special memories of watching Manchester United and Manchester City, and was very emotional at times. I’d like to thank them, and Manchester Metropolitan University, for creating what was a wonderful day.”

Lou Macari, says: “It was great to visit the dementia café at EachStep Blackley today. I really enjoyed talking with guests and reminiscing about games of the past. People enjoyed chatting about the great games of the 1970’s and the likes of George Best, Bobby Charlton and Dennis Law. It was a wonderful event to be part of and I hope everyone enjoyed it.”

Alex Williams MBE, Ambassador for Manchester City’s Foundation, City in the Community, says: “It was a fantastic morning and City in the Community were delighted to support such a brilliant event in the local community. No matter who you support, football has the power to bring people together and that’s what I loved about this event. The reaction from the guests was great and we shared some moments from my playing career but also players such as Colin Bell, Francis Lee, and Mike Summerbee.”

Colin Bridgford, CEO of Manchester FA, says: “Many people who took part in this event will have played football in their younger lives, or watched their heroes every weekend, so today has been very emotional at times. It was great to see people’s treasured memories come flooding back, and to hear them talk about what Manchester United and Manchester City means to them. At Manchester FA, we are committed to giving back to the local community. Today showed football can break down barriers and make a difference, and has been truly inspirational.”

Dr Annabel Kiernan, Director at the Centre of Football and its Communities at Manchester Metropolitan University, says: “At Manchester Metropolitan University, we think that it is important that our work connects with local communities. We were very happy to support Community Integrated Care’s Dementia Café at EachStep Blackley, by helping to plan today’s session. Football is a big feature of Manchester and its culture, so people had some wonderful recollections to share. I was delighted to see people get so much enjoyment from reconnecting with their football memories.”