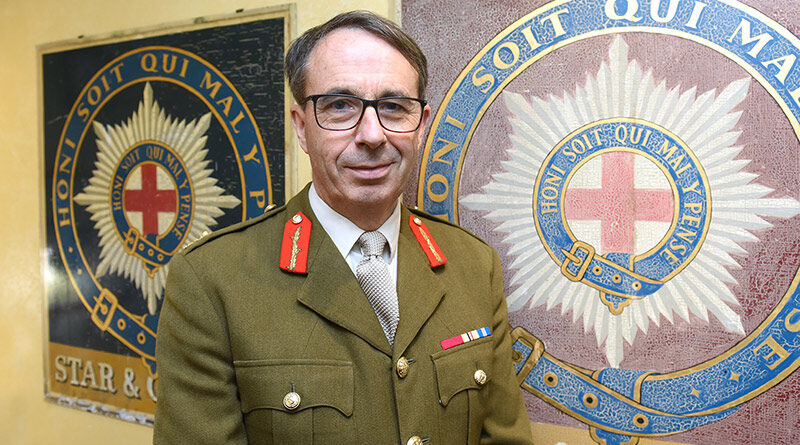 Royal Star & Garter Chair Major General Tim Tyler represented the charity at the funeral of its Patron, Her Majesty The Queen. Here, he looks back on what was ‘a long and emotional day’.

I had the great privilege of representing Royal Star & Garter at the funeral service for Her Majesty Queen Elizabeth II in Westminster Abbey.

My wife and I walked to Westminster from Kensington. The roads were closed; there were police and security personnel to be seen but otherwise silence as if the world had stopped. As we got closer people emerged from everywhere, all going the same way; there was a sense of expectation. My wife headed for St James’s Park and The Mall as I walked towards the inevitable security checks before entering the Abbey. I met old friends and made new acquaintances, all united in respect for Her Majesty and her extraordinary legacy.

The Abbey was filling up. I have been there before for ceremonial occasions but none like this. It was immediately clear that this sad but uplifting event was bringing together peoples and organisations from every corner of the world. The Queen and the Royal Family have a very strong relationship with the Armed Forces which I have enjoyed over the years but Queen Elizabeth had clearly had just as strong and invigorating relationships with everyone!

I was sitting next to two wonderful people: Brian Roberts, recently awarded the MBE for his work with Healing Hands Network which provides support to those who are suffering from the mental, physical and emotional after-effects of war, particularly in Bosnia and Herzegovina and now to British military veterans; and Victoria Clayton of the Shire Horse Society which, of course, takes a special interest in the Household Cavalry drum horses. We were sitting near holders of the Victoria Cross and George Cross and among representatives of all the orders of knighthood.

As the processions of dignitaries arrived: Heads of State, Prime Ministers, members of the Royal Household, religious leaders of many, many faiths and the Royal Family, I found myself thinking of the weight of history there today. Five generations of my family have had Queen Elizabeth as our monarch. I could feel this concentration of history and could sense the presence of the Royal Star & Garter residents, most of whom have lived through the changes witnessed by Queen Elizabeth, our Patron for 70 years, and who were watching the service on TVs in our Homes in Solihull, Surbiton and High Wycombe. Will there ever be an event like it again? How did one person manage to provide such a shining example over all those 70 years? What a challenge Queen Elizabeth offers us all and how do we respond? I wonder not how her successors will follow in her footsteps but what can we all do to support His Majesty the King and his Royal Family to continue her work as a unifying and inspiring force for good in our world?

The atmosphere changed from the moment the coffin was carried into the Abbey. The service was, of course quiet, contemplative and with a sense of sadness for an irreplaceable loss. This was the place of the Queen’s marriage and coronation and now the place for us all to say farewell. But the Archbishop of Canterbury reminded us that this was a moment for celebration of a remarkable life and the transition of Her Majesty into the heavenly estate to which Christians aspire. For me the highlight of the service was the singing of the anthem composed for the service by Sir James MacMillen CBE based on St Paul’s letter to the Romans in which, after a quiet opening, the choir erupted into a joyous and almost chaotic ‘Alleluia’. If you didn’t notice this you must listen again.

After the service I set off to find my wife in the packed St James’s Park. I was crowded with people who wanted a photograph of the Order of Service. People clearly respected the solemnity of the occasion and they wanted to be a real part of it and not just spectators.

What a joy it was to be in my uniform again. I lost count of the number of people who thanked me for all the organisation of the period of mourning and the funeral – I explained that I had had no responsibility, but they just wanted to thank the Armed Forces who are held in such respect. There were many soldiers from various units assisting with security and directing and advising the visitors, doing a fantastic job. I stopped to chat to quite a few and that immediate empathy was obvious, independent of rank and age, just soldier to soldier. These young men and women will, in time, be veterans and I am sure that Royal Star & Garter will be there to provide for any of them should they need our care.

Home now, after a long and emotional day, I would like to extend Royal Star & Garter’s condolences to His Majesty the King and all the Royal Family. We have all had time privately to grieve for a Queen who we all treasured in our own way. They have all lost their Queen, mother, grandmother and great grandmother and been in the spotlight for days, and they now need time to themselves. I am sure we all look forward to their full presence again, in time, in the life of the country and more widely.

We will continue to provide our ‘Care with courage’ to our veterans, following the example set by Queen Elizabeth and with the continued love and commitment of our President, Her Royal Highness Princess Alexandra.