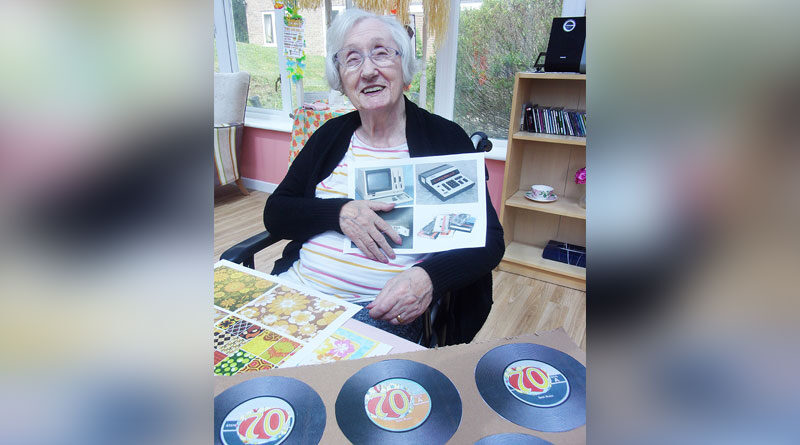 Residents and staff at a Maidstone care home rolled back the years as its time-travelling ‘Through the Decades’ theme reached a funky finale, in the bygone era of the 1970s.

Excited to reminisce and return to an era remembered so fondly by many, residents took full advantage of the fun-filled day that took them on a virtual tour of the decade, which included fun quizzes, cardboard cut-outs of music records and a full-size replica of the first mobile phone, with a large carry-around battery pack.

Dubbed ‘Through the Decades’, the third and final theme day following trips back to the 50s and 60s, saw staff embracing the iconic 70s era. They took it in turns to sing ABBA songs with their residents, who had to guess the lyrics first before singing the rest of the song on the karaoke.

In addition, residents and staff enjoyed chatting, reminiscing and sharing stories from the memorable decade, while others compared how old they were in the 70s – with ages ranging from 40 to two!

Paula Smy, Loose Valley Care Home’s Recreation and Well-Being Champion, fondly remembered her mum and dad’s house, when in 1977, her family moved to Coxheath. To this day, she’s never forgotten the floor-to-ceiling wooden cladding one side of the long lounge, which stretched from the front to the back of the house!

Reflecting on a day filled with laughter and nostalgia, Paula said: “Our latest and final journey back in time to the 1970s couldn’t have gone any better. To see so many smiling faces amongst our residents, who relished in sharing tales from a familiar time, is something that I’ll never forget.”

She continued: “Everyone had so many fascinating tales to share with one another and it was so much fun seeing staff and residents alike take their turn on the karaoke. It was the perfect ending to what has been an unforgettable theme inspired by Nellsar!”