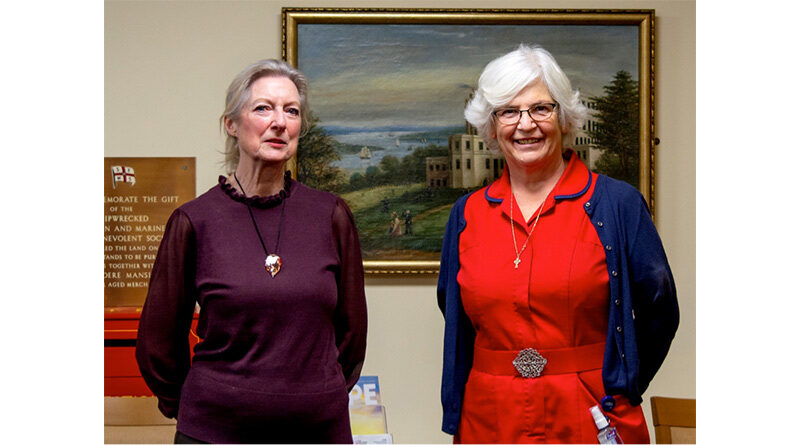 Maritime charity, The Royal Alfred Seafarers’ Society, is bidding farewell to two of its longest-serving staff members who are retiring after collectively serving 95 years supporting residents and tenants at the Society’s Surrey-based care home.

Home Manager, Anne Kasey, retires this month after 37 years’ service, followed by Executive Assistant to the CEO, Margaret Brazier MNM, who will be retiring in December after 58 years.

The pair, who have been work colleagues and friends since 1983 when Anne joined the Society, have seen a raft of changes over their time at the charity, including two relocations of the home, the 150th anniversary of the Society and countless Royal and celebrity visits.

On her retirement, Anne said: “My time at the Royal Alfred has been really special. Initially when I joined as a staff nurse back in the eighties, I was only planning on staying for six months, but the Society was so good to me  that I decided to stay and have spent 37 happy years of my career here, becoming Home Manager in 2005.

“I have made some memories that will stay with me forever and will miss my colleagues and of course the residents that I have cared for over the years, all 1,300 of them! Every single one of them will hold a place in my heart and it has been a pleasure to know them all.”

Margaret said of her time at the Society: “I have been working for The Royal Alfred since I was 16-years old and it’s been the only workplace I have ever known. I feel incredibly fortunate to have found my niche with such a compassionate Society and fantastic working environment with a brilliant team. I started as a short-hand typist and worked at head office with many other office girls. We had to do everything we do today, but by hand as there were no computers or technology to help us get to the job done!

“One of my highs was when I received the Merchant Navy Medal in 2012, after 50 years’ service to seafarers. This was such a proud moment for me and a tremendous honour to be recognised for my contribution to a wholly worthwhile cause – caring for and supporting seafarers and their families – and my involvement in all of the projects focused on improving facilities for everyone at the home. I will miss the people the most when I retire, the Society has always had such a family feel and I will miss working with the team every day.”

The Society’s CEO, Commander Brian Boxall-Hunt, said: “We are sad to say goodbye to Anne and Margaret as they retire. They are two individuals who have dedicated so much not just to the Society, but the seafaring community itself. It’s important to recognise their contribution to the Society, as 95 years’ service between them is certainly impressive! The fact that they have both worked such long careers here at The Royal Alfred is testament to the charity we stand for. We wish them all the best for the future and hope to see them at our Annual General Meeting next year as our special guests.”