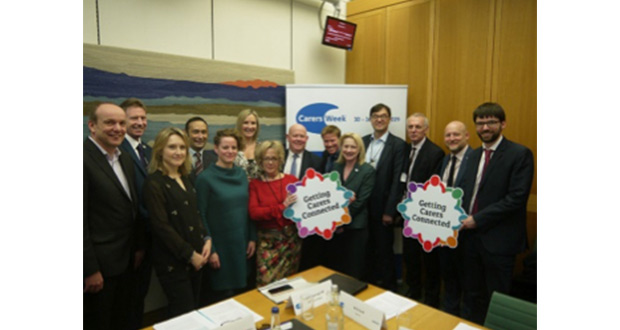 Unpaid carers looking after loved ones living with an illness, disability, mental health condition or as they grow older are seven times more likely to be lonely compared with the general public, new figures suggest.

Not having enough time, or money, to participate in leisure activities, as well as the stigma of being a carer, means one in three unpaid carers (35 per cent) are always or often lonely, compared with just one in twenty (five per cent) of the general population.

Research released for Carers Week 2019 (10th – 16th June) also reveals unpaid carers feel what they do in life is significantly less worthwhile compared with the rest of the population, with those struggling financially over a third less likely to feel that the things they do in their life are worthwhile. This is despite the vital support carers provide their loved ones and their enormous contribution to society.

The extent of loneliness and poor wellbeing amongst carers is revealed as new estimates suggest there could be far more people caring unpaid than previously thought.

There are a potential 8.8 million adult carers in the UK, up from 6.3 million estimated in the 2011 census – a huge increase of a third.

With one in six adults now taking on a caring role and at a heightened risk of loneliness – referred to as one of the greatest public health challenges of our time – seven national charities have come together to highlight the urgent need to tackle loneliness and improve wellbeing among the UK’s carers, who all too often put their needs second.

“With as many as one in six adults in the UK now taking on an unpaid caring role it is high time our society recognises and values the crucial support they provide.

“Many unpaid carers struggle alone without support. If we are to combat the loneliness epidemic facing them it is imperative that everyone – Government, employers, health and care professionals, schools and universities, and each of us individually – plays a role putting carers in touch with practical and financial help.

“Carers need to feel they are valued, understood and connected to their community.”

The research comes from a survey of carers, the majority of whom provide over 50 hours of care for a loved one each week.

Evidence shows those worst affected by loneliness are parent carers looking after disabled children under 18 years old, being nearly ten times lonelier than the general public.

Unpaid carers report being twice as anxious as the general public, and those struggling financially or going without practical support with caring are half as satisfied with life as the rest of the population.

The findings show how financial and practical support can help improve the wellbeing of the UK’s 8.8 million carers and get them better connected to their communities.