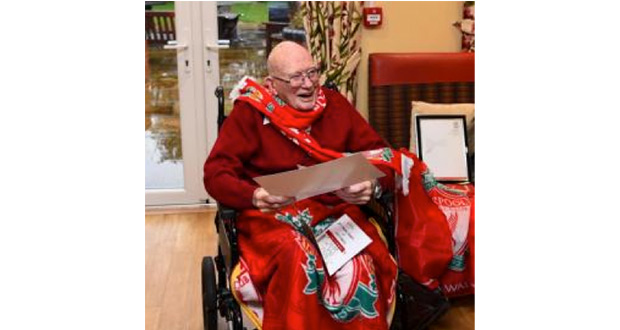 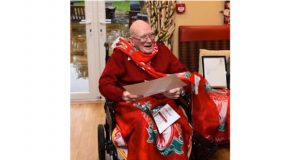 Bernard, who is a resident at RMBI Home The Tithebarn, in Great Crosby, was surprised and delighted this week when Liverpool FC goodies, including a birthday cake and personalised ‘Bernard 104’ shirt, were hand delivered to the Home, along with a personal letter from Jürgen Klopp himself, wishing him a happy birthday and thanking him for his loyalty to the club.

Bernard, who is 104 today (January 25th), began his love affair with Liverpool FC in 1923, when he was eight years old and an uncle started taking him to football matches. They would travel by tram from Wavertree where they lived. One week they’d see Everton and the next they’d see Liverpool. Before long, Bernard favoured Liverpool FC and he has been an avid supporter ever since.

Back in 1950, he bought an 8 inch television so he could watch the FA Cup Final (Arsenal won, 2-0) and invited all his neighbours to join the family in their front room.

Another highlight during his 95 years supporting Liverpool FC, was being at Anfield with his young family for the famous cup tie win (1-0) against Wolverhampton Wanderers in March 1953.

For Saturday’s match, Bernard, who has seven grandchildren and fourteen great grand-children, was accompanied by his sons, one of whom is coming all the way from Canada to be there.

Bernard said: “I’ve been a proud Liverpool supporter since I was a boy and have supported the club through thick and thin, so I’m absolutely thrilled to be off to the match on Saturday! Obviously, the icing on the cake will be when we beat Crystal Palace!”

Linda Johnson, Home Manager at The Tithebarn, said: “Bernard is well known at our Home for his love of Liverpool FC. He keeps up to date with every game, speaking weekly on the subject to his son in Canada. He’s such a wonderful gentleman and we’re delighted that the Club have come up trumps for him!”