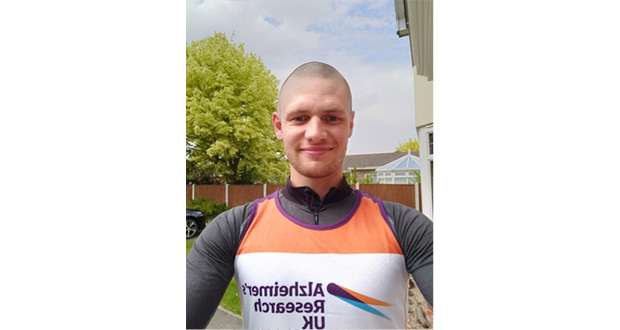 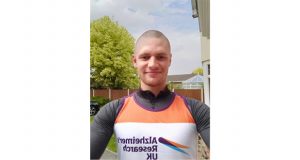 A 23-year-old engineer from Lincoln has shaved his head, run a half-marathon and taken part in a skydive for Alzheimer’s Research UK – and all in a three-day period.

Ryan Lovett completed the nerve-wracking challenge from 11 to 13 May. It wasn’t an easy feat, as he admits he isn’t “the best” with heights.

However, he was determined to raise funds for the UK’s leading dementia research charity after a recent experience visiting his nan in hospital, who shared a ward with people with dementia.

His nan was admitted with a chest infection, and when Ryan went to visit her, he met people on her ward who were living with dementia.

He said the experience had a “huge impact” on him as he had never met somebody in the later stages of the condition before.

“It was devastating to see – some of them were in a place that I hope I’ll never be in.

“When I was looking for charities to fundraise for, I read about Alzheimer’s Research UK and it just felt right to do this for them after seeing the effects of this cruel condition.”

Ryan’s fundraising last year was inspired by his mother, who died when he was just two years old from a brain tumour. He raised funds for a cancer charity to help others living with brain tumours.

After raising £1,000 he decided to keep fundraising, and now hopes to raise funds for a different charity each year.

“My mum was a very caring person and that inspired me to want to help others too. I want to make her proud and try my best to do that by helping others.”

The challenge began on Friday 11 May when he shaved his head, followed by a run on the Saturday equivalent to the distance of a half-marathon, and he finished up on the Sunday with the skydive.

Saturday 12 May marked 21 years since his mum passed away from cancer – which made his challenge even more poignant.

“It’s wasn’t an easy challenge to take on. The furthest I had run before Saturday in one go was 11 miles, and that was tough.

“I took these three challenges on because I knew it would be a challenge for me. I knew that my body would be in pain for the skydive which was daunting.”

The company Ryan works for has also agreed to match whatever his fundraising total is. He has now smashed his target of £500 for Alzheimer’s Research UK, and those interested in giving him a final boost can do so here: https://www.justgiving.com/fundraising/RyanLovett

“We would like to say a huge thank you to Ryan for taking on this amazing challenge in aid of Alzheimer’s Research UK.

“There are currently over 850,000 people living with dementia in the UK, and despite this, there are no treatments that can slow or prevent the development of the condition.

“Our mission is to bring about the first life-changing treatment for dementia by 2025, and this will only be possible with the fundraising efforts of people like Ryan.”