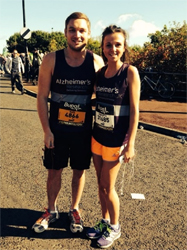 Two PageGroup employees from Lancashire laced up their running shoes for the Bupa Great North Run at the weekend in support of Alzheimer’s Research UK, the UK’s leading dementia research charity. Charlotte Haworth, from Clitheroe, and colleague Alex Mackenzie, from Burnley, hope to raise hundreds of pounds for dementia research between them after taking part in the event in Newcastle on Sunday 7 September. The pair, who both work at the Manchester office of Michael Page – part of specialist recruitment company PageGroup – signed up for the half-marathon after learning about the charity through their work.

The duo’s efforts are part of an ongoing programme of fundraising by PageGroup employees, which began when the company selected Alzheimer’s Research UK for a two-year charity partnership last year. Over the course of two years, staff aim to raise £200,000 to support two PageGroup Research Scholarships, bringing two bright researchers into the dementia research field on PhD programmes.

Charlotte, 24, finished the 13-mile race in 2 hours and 8 minutes, while Alex completed the course in just 1 hour and 40 minutes. Charlotte said:
“I’d thought about doing the Great North Run before but couldn’t get a place last year, so when we saw an email about it at work Alex and I decided to go for it. It was a bit of a shock when we got the email back to say we were signed up – that was six months ago but the day seemed to come round really quickly.

“On the day it was boiling hot, and there were so many people there that we didn’t cross the start line until 40 minutes after the first people set off. Everyone at work is quite competitive and I knew I wanted to do well, but I was really pleased that I managed to keep running the whole way, as I’d expected to have to walk for some of it. With the crowds there cheering the atmosphere was unreal: everyone shouts your name and encourages you, even though they don’t know you. It was a huge team spirit and it was good fun.

“People have been very encouraging and we hope lots of people will sponsor us now we’ve finished the race. Since Alzheimer’s Research UK became our charity partner I’ve had the chance to find out more about the charity’s work, and I was proud to be supporting this really great cause.”

Miranda Johnson, Head of Community and Corporate Partnerships at Alzheimer’s Research UK, said:
“What a brilliant challenge – we couldn’t be more grateful to Charlotte and Alex for their efforts, and it’s great to see that their months of training paid off. Every penny raised by PageGroup’s staff is making a huge difference, helping support two new dementia scientists in the search for answers to important research questions.

“Currently around 16,000 people are living with dementia in Lancashire alone, and though we lack effective treatments to fight the condition, with the right research we can tackle this challenge. We rely on donations to be able to fund our research, and it’s thanks to supporters like Charlotte, Alex and their colleagues at PageGroup that we can continue our work.”

To sponsor Charlotte and Alex, visit www.justgiving.com/charlottehalexm, or to learn more about corporate partnerships with Alzheimer’s Research UK, email corporate@alzheimersresearchuk.org or call 0300 111 5 555