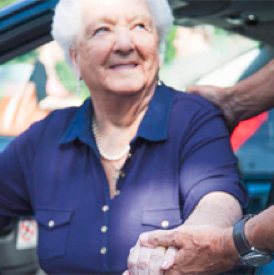 Almost 200,000 over-75s have gone home after hospital without enough support

Older people returning home from hospital without enough support are MORE THAN twice as likely to be readmitted within three months (1), according to a new report, Going home alone, released this month..

The findings reveal in the last five years almost 200,000 people aged over 75 returned home from hospital without the support they needed to look after themselves (2), and thousands of readmissions could be prevented if they received more help at discharge.

The report, assisted by The King’s Fund, marks the launch of a campaign Let’s End Going Home Alone, which sees the charity work in partnership with communities, local authorities and NHS Trusts to provide more volunteers in hospitals and support vulnerable older people in their homes following discharge from hospital.

Increased longevity is putting pressure on health and social care – over the last ten years hospital admissions for those over 75 have been rising four times faster than ageing trends in the population (38% versus 10%) (3). The growth in hospital readmissions has been higher still, up by 86 per cent.

The Government this year announced that as part of the recently boosted £5bn Better Care Fund, it aims to save £532 million through improving home care and cutting hospital readmissions. Kings Fund analysis of hospital readmissions and the cost of ‘excess admissions’ in England, estimated that providing volunteer support to older people as they leave hospital could save the NHS £40.4m each year through reducing unnecessary readmissions.

Older people can be especially vulnerable and frail following a stint in hospital, and often require careful management of their health conditions. Currently, 13 per cent of over-75s are readmitted within three months of discharge, adding pressure to already stretched A&E services.

Among those who were readmitted to hospital within three months, a greater need for support at discharge was reported with 43 per cent saying they had needed “a great deal” or “quite a lot” more, compared with only 27% of those who were not readmitted within three months. More than a quarter (26%) said they simply didn’t feel well enough to go home.

While the majority are relieved to return home at discharge, many older people feel anxious (15%) at the prospect. Those living alone can feel particularly vulnerable – in Britain, 46 per cent of over-75s who have been in hospital in the last five years live on their own.

According to the Royal Voluntary Service, providing emotional and practical support to patients on their return from hospital can help people settle back in their homes, rebuild confidence and independence, and reduce the effects of isolation and loneliness. With the right and often very simple and inexpensive support, readmissions can be dramatically reduced.

Since the establishment of the Royal Voluntary Service Home from Hospital scheme in Leicestershire in 2012, over 600 older people have been supported, with very low readmission rates to hospital among those who used the scheme (7.5 per cent within 60 days, half the national average). Volunteers support older people after a stay in hospital, making sure their house is safe and warm, helping with meals, transport to follow-up GP appointments and providing a friendly face that they can always call on to raise their spirits.

“The population is living longer, an achievement which should be celebrated – yet it is presenting a challenge for the very organisation that has helped people live longer lives. With local authority and hospital trusts facing budget cuts, we believe greater volunteer support through Home from Hospital schemes can improve the quality of older people’s lives long after a hospital stay and save the NHS millions of pounds.

“Placing a caring volunteer at the centre of an older person’s recovery plan dramatically improves their experience, their confidence and their well-being, and helps them continue to live independent fulfilling lives. It also drives important efficiencies in hospitals enabling swift, well-managed discharge from wards. A strong warning sign identified in the report is the link between early discharge and readmission.”

“We were pleased to assist the Royal Voluntary Service with their analysis which shows how social isolation and loneliness are strongly associated with poorer physical and mental health and well-being, particularly older people. Well targeted Home from Hospital support schemes could reduce the need for inappropriate and avoidable hospital readmission and other forms of care. Whilst as a consequence this may save the NHS significant sums, their ultimate objective is better health and well-being of elderly people, for which there is good evidence.”

Within the report, Royal Voluntary Service has developed the Six Essentials it believes every older person should be entitled to experience when they leave hospital: