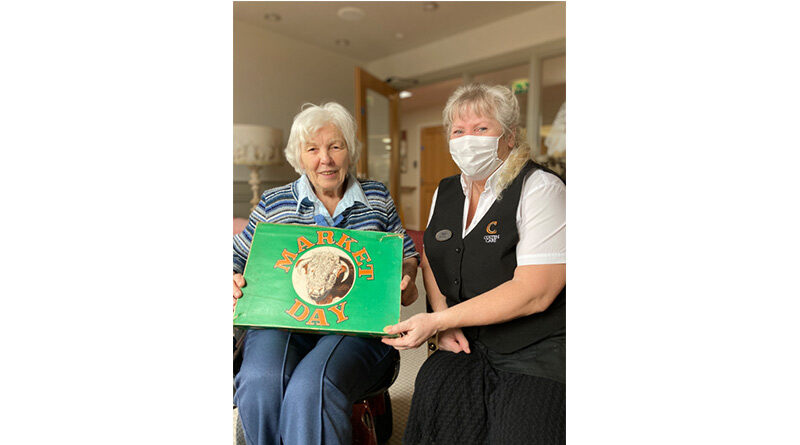 A care home waitress surprised and delighted one of her residents by tracking down a children’s board game they invented nearly half a century ago.

Jenny Mitchell-Jones, who lives at Colten Care’s Chichester home Wellington Grange, was one of five friends who devised and launched a game about farm life in the run-up to Christmas 1974.

Market Day featured 33 miniature plastic animals, including cows, sheep and chickens, which players collected for points as they journeyed to and from market.

Having lunch at Wellington Grange recently, Jenny happened to mention the game during a conversation with waitress Sue Milton.

Sue was keen to find out if any of the 5,000 games produced were still in existence 47 years later.

Sue said: “After many hours of hunting I managed to track one down on eBay. It had the board, all the animals, the dice and counters, and the hazard and benefit cards, so I bought it to surprise Jenny with.”

Jenny said: “I couldn’t believe it. When I saw an actual game again, with its original box and all the bits and pieces, I was delighted, over the moon, and straightaway wanted to share it with everyone.”

Companionship staff at the Broyle Road home arranged for Jenny to give a talk about how Market Day came to be made. She then demonstrated how to play it and, of course, was only too happy to have a friendly game with fellow residents.

Companionship team member Sarah-jane Willis said: “It was fascinating to hear how Jenny and her friends took an idea for a family game from conception into reality.

“We enjoyed hearing about how she travelled to London to source the miniature plastic animals and how she and her friends converted a barn into a production line for making and filling the boxes.

“Jenny was a little concerned that she wouldn’t remember the rules but it all came flooding back as soon as we had a run through.

“The residents who attended loved hearing all about it and the actual playing of the game was a huge amount of fun.

“We were all so impressed and inspired at what Jenny and her group of women friends had achieved.”

Back in 1974, Jenny and her friends Diane Sawday, Barbara Bennett, Anne Kendall and Diane Flemming were all living near to each other on separate West Sussex farms.

The five were members of a small investment club that was showing little success on the stock market so, to gain some income and have fun at the same time, they invented Market Day.

Aimed at children aged seven to 12, and designed for two to six players, the game was marketed as a mail-order Christmas gift for the princely sum of £3.50. Orders were made to Holdfast Enterprises on a farm near Sidlesham, south of Chichester.

Under the rules, players progressed around the board ‘collecting’ the plastic animals – a bull, several cows, horses, sheep, pigs, turkeys and chickens. Each type of animal scored different amounts of points.

If a player landed on a hazard square, the relevant card they had to pick up might read something like, ‘Horse has colic, miss a turn’. On the other hand, a benefit card might say, ‘Good lambing season, take a sheep’.

As Jenny recalls, the five friends already had a captive audience to try the game out on before it was launched to the public.

She said: “We were all mums and had 20 children between us so there was no problem to have it thoroughly tried and tested.

“One thing we made sure of was that it could be played in just half an hour. That way the children didn’t get bored and mums and dads didn’t get fed up waiting for the game to finish before bed time.”