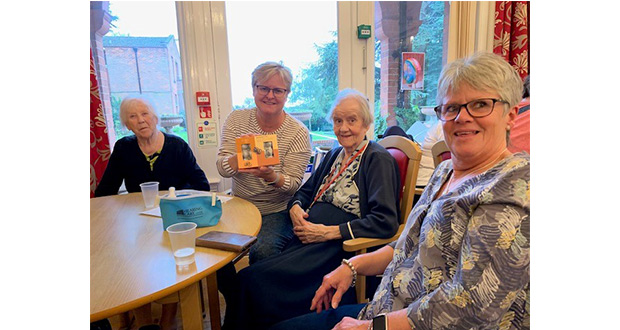 MHA Norwood care home in Ipswich recently celebrated its 40th anniversary in style as staff, residents and volunteers came together for a fun-filled day which paid homage to the care home’s 1970s roots.

A formal lunch was served, before the party continued into the afternoon with a fancy-dress competition, 70s themed games and a buffet tea. The Mayor of Ipswich, Jan Parry, was also in attendance and joined in with the activities.

Norwood has a fascinating history, with the building dating back to 1895 when it was used as a family residence. Originally named ‘Parklands’, it housed the Fosdick family, before being bought by the Church Commissioners in 1913 and transformed into ‘The Bishops Palace.’

The house remained under the same ownership for a further 60 years, before changing hands again. Bishop Brown, who lived in ‘The Bishops Place’ at the time, was good friends with Dr Arthur Hill and his wife, Elsie. The couple had close connections with the Methodist community and often opened their home up to Methodist visitors from around the world.

After his wife’s passing in the 1970s, Dr Hill decided to downsize and entered into negotiations with national charity MHA about donating his home. However, it was found to be unsuitable for development as a residential home and so plans did not proceed any further.

He knew, however, that his friend Bishop Brown was looking to move into a smaller home – so the two came to an arrangement whereby they swapped houses and MHA was able to acquire the grand house.

Using its own funds, along with a generous contribution of £200,000 from ‘The Norwood Charitable Trust’, MHA soon transformed the building into a fully-operating residential home. It was the single largest donation MHA had received at that time and the home was renamed ‘Norwood’ in recognition of this.

Norwood officially welcomed its first residents in 1979 and continued to grow in capacity over the years that followed. It now provides care and support to 45 older people, enabling them to live later life well.

Home Manager, Sarah Claybrough, said: “Everyone enjoyed our day of celebrations and it was fantastic to have the Mayor join us.

Norwood’s story is a fascinating one so it’s only right that we celebrated our 40 years in the building by throwing a big party. Our team here continue to work hard to provide our residents with the very best in later life care.”