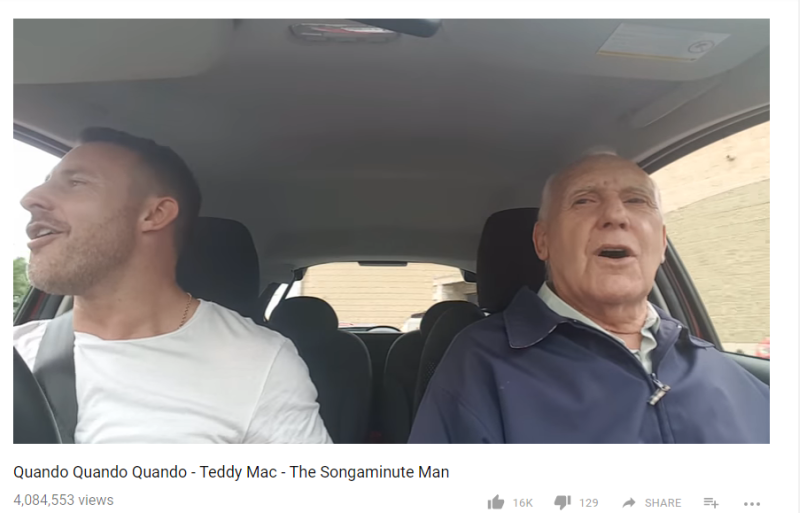 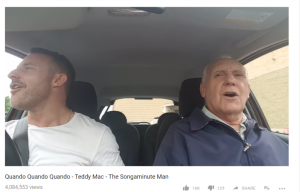 Last year Teddy became an internet sensation following a video of him singing Quando Quando Quando in the car with his son Simon that went viral across the world and helped raise £150,000 for Alzheimer’s Society.

Teddy was diagnosed with dementia back in 2013, a condition which sees him often forget who his family members are and makes him prone to confusion and sometimes aggressive outbursts.

It was during a drive around their hometown in Blackburn that Simon noticed Ted, who used to be a Butlin’s Redcoat and club singer, could remember a lot of his old tracks off by heart. Since then, Simon and Ted often drive around and sing along together. Simon was inspired to film some of their own Carpool Karaoke sessions and put them on YouTube, encouraging people to donate to Alzheimer’s Society. The video of Simon and Teddy singing the Engelbert Humperdinck hit Quando Quando Quando has been viewed over five million times to-date.

Following the success of his first single ‘You Make Me Feel So Young’ with Decca Records label last year and thanks to the support of crowdfunders across the world, Teddy has now recorded his first album of all his old classics. The album will go on sale on Thursday 21st September, marking World Alzheimer’s Day

‘It really is a dream come true that dad has been able to record this album – he has been an entertainer his whole life so being able to do this with a big band really is amazing. Dad’s condition means that he is increasingly confused and disorientated with sometimes outbursts of anger and aggression, and he often does not recognise either myself or Mum. We had so many requests last year about Dad making an album that we decided to crowdfund it ourselves.’

‘The tracks are based on Dad’s backing tracks he used to sing back in the day which provided the soundtrack to my life growing up in Blackburn. Dad would often say to me ‘Songs are just poems set to music’. Essentially, this album is about love, which at the end of the day is the only thing that matters.’

Some of the best musicians and audio specialists in the country worked on the album. Guy Barker, who has played with the likes of Frank Sinatra, Sting and Wham!, and his orchestra provided the instrumental accompaniment. Award-winning audio engineers Steve Price and Tim Young, who have previously worked with artists such as Adele, Elton John and Queen also worked on the tracks.

The album includes renditions of thirteen classic songs including the joyous Nat King Cole number L.O.V.E, the big band Sinatra style I’ve Got You Under My Skin and the song that started it all, Quando Quando Quando.

25% of the funds raised from the album sales will go to Alzheimer’s Society to fund vital research into dementia and ultimately help find a cure for the condition, which currently affects 850,000 people across the UK.

‘Dementia is set to be the 21st century’s biggest killer so it’s absolutely fantastic that Teddy has been able to record this album and raise money to help us create a world without dementia. Whilst it has been an understandably difficult year for Teddy and his family dealing with the day to day realities of a dementia diagnosis, this just goes to show you can still continue to do the things you love and work towards lifelong dreams. Teddy is also a great example of the positive impact music and singing can have for people with dementia.’

‘On behalf of everyone at Alzheimer’s Society, I’d like to say a huge well done to Teddy and Simon on the album – we urge Teddy’s supporters and everyone across the globe to unite against dementia and buy the album for World Alzheimer’s Day.’