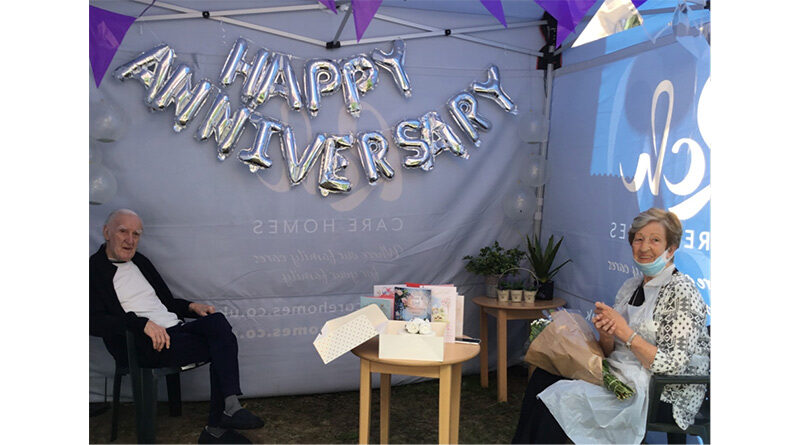 We all love a good love story, and George and Jessie Willis’ story is exactly that!

George has been a resident at Brentwood Care Centre since the beginning of 2020, and during that time, George’s wife, Jessie, and their family have become part of Brentwood’s Family.

Since the COVID-19 lockdown and the resulting visitor restrictions at the Residential Dementia and Nursing home in Pilgrims Hatch, George, Jessie and their family have enjoyed frequent Facetime sessions to share all of their news and spend time together. Newsletters and social media posts have also helped, but the family have sorely missed each other.

When the Brentwood team discovered that George and Jessie’s 62nd Wedding Anniversary was coming up, they sprung in to action to make their day as special as they could.

A romance which has lasted over 65 years, George is the youngest of 11 children and was doing National Service when, aged 18, he first met Jessie at a National Services Dance in Darlington. However, the fateful meeting of this love-struck duo almost didn’t happen when Jessie’s mum almost put a stop to her going until her Aunt promised to escort her to and from the dance on the bus. After that moment, they were inseparable, George visiting every weekend when on leave.

This isn’t the first time that George and Jessie have enjoyed a special anniversary surprise: on their 60th Wedding Anniversary they received a wonderful card from Her Majesty the Queen in celebration of the occasion.

With new Government and Public Health England Guidance issued on 22nd July 2020 and RCH Care Homes new Visitor Guidance policy in place, it now meant that the team at Brentwood Care Centre could start planning not only their 62nd Wedding Anniversary but also a magical reunion.

With a fair few ‘old romantics’ amongst the team, it really is no surprise the lengths they went to when reuniting the beloved couple for their anniversary celebrations.

“We are delighted to have been able to share the celebration of marriage, love and commitment between this lovely couple. Relationships are essential to the health and wellbeing of our residents and their loved ones and we continue to celebrate these. Not even a pandemic can stand in the way of love!” – Torie Pollard, General Manager

The team liaised with George & Jessie’s family to collect as much information about the couple, including lots of photographs both old and new! They also arranged for them to have a celebratory garden visit in a beautifully decorated gazebo, filled with balloons, a specially designed cake and Jessie’s favourite flowers.

When asked what the secret to a long and happy marriage was Jessie remarked, “Thinking about the other person and always looking after my George”. However, when asked himself, George laughed “My best advice is to always do as you’re told!”