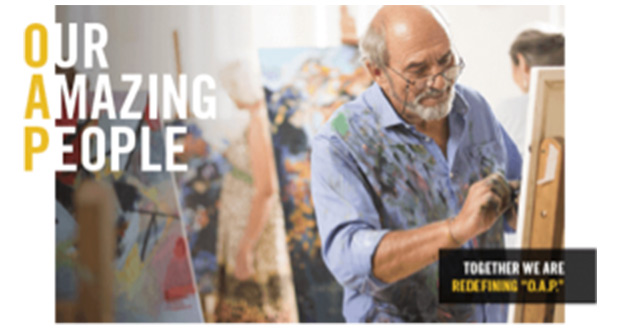 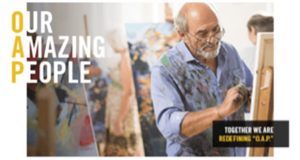 The campaign celebrates the talents and skills of older people and the contribution they make to society – particularly those who volunteer. Each year, the charity’s 25,000 volunteers, a significant number of whom are over 65, gift 500,000 working days to their communities through their voluntary service.

The campaign was also developed to challenge stereotypical views of older age and to redefine the term O.A.P – Our Amazing People.

“As far as I’m concerned age is just a number and I feel I’m in the prime of my life. Once you hit 65 it doesn’t mean you’re past it and unable to do certain things. I intend to continue performing and generally doing as much as I possibly can until I’m no longer able to. That’s what makes life so rich and rewarding.”

“I’ve volunteered for the charity for over 15 years now and since my husband died two years ago it’s helped to have this focus and to have a sense of purpose. It is such a joy to work with a great team of people, serve my community and see people benefit from what I am doing.”

Rae Wilson, 77, from Stirling, who set up and runs a Royal Voluntary Service lunch club in Balfron

“We wanted to recognise the many older people who are defying traditional views of ageing to live life to the full. There are so many people who do wonderful things in society and they don’t get the recognition they deserve. Many local communities rely on their steadfast contribution – whether they are running a community club or supporting those in need.”

Recent research identified that 23 per cent of over 65 year olds volunteered over the last three months to a charity, organisation or in the community.

Over the next few months the charity will be launching a drive to recruit more people to volunteer, many of whom it hopes will be older. They will be offered help to set up clubs and activities to support their local c