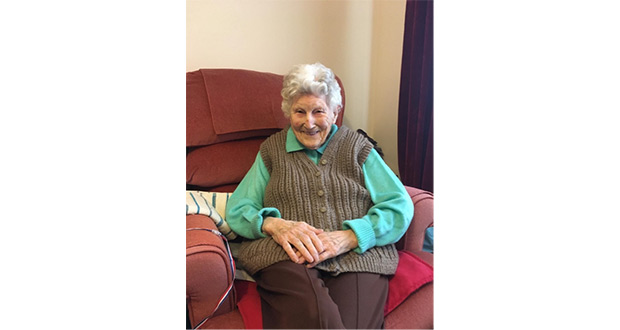 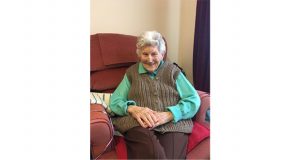 A WEST Lothian woman is citing military graft and never having to worry about a man as the main ingredients for reaching the magic century mark.

Mary Norris, who lives at Bield’s St Andrews Court in Uphall, believes that her role making weapons during World War Two and her independent lifestyle have both contributed to a long and happy life.

Born and bred in Broxburn, Mary – who will reach the milestone birthday on 3rd December – was one of 10 children growing up.  With eight brothers and one sister, times were hard financially for the family.

Mary said: “I was born in 1918 during the end of the Great War and I’ve seen a lot of changes. I had eight brothers and one sister, but sadly I am now the only one that’s left.

“My father worked hard to keep a roof over our heads. He wasn’t a rich man, he earned small wages, but he did his best.

“He worked in the oil works and it was very difficult, but he did the best he could to keep us all together.”

Although Mary has lived her whole life in West Lothian and has never set foot outside of Scotland, she has lived an interesting life – undertaking an extremely important role during World War Two.

Mary added: “When the Second World War started in 1940, I was only 22 years old. I worked in the munitions factory in Edinburgh building parts for weapons that were sent to the army.

“We worked all through the early morning, throughout the day and into the night.

“Five of my brothers served in the war; three were in the army, one was in the air force and one was in the navy. Thankfully, they all made it home. I’d like to think I helped them.”

When the war ended, Mary took on a role as a cleaner at Crawford’s on Edinburgh’s Frederick Street. Not long after, her mother took ill and Mary became her carer until her death in 1959.

Since moving to St Andrews Court in 2003, Mary has formed a strong bond with the other tenants and staff. Lynn McCusker, Retirement Housing Manager at St Andrews Court, believes that her inspiring outlook on life has played a vital role in keeping her young at heart.

Lynn said: “Mary is always on the go. She is out most days, and goes to church and visits Holmes Gardens day centre. She’ll occasionally treat herself with a trip to the hairdressers, too.

“I know that she’s very excited for her telegram from the Queen and the local paper are going to come out and take her picture. She’s even been asked to go and switch on the Christmas lights in Uphall.

“She loves to dance and enjoys a sherry, so maybe that’s the secret.”