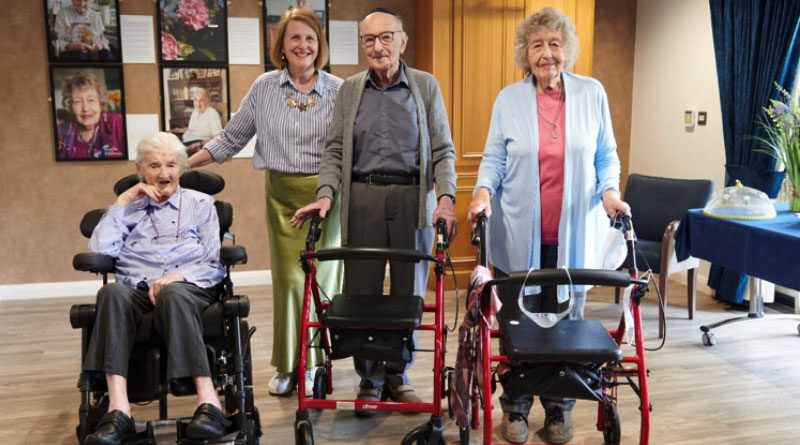 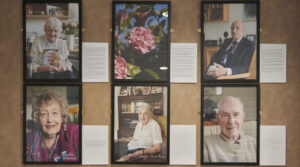 A special exhibition documenting the experiences of five Holocaust refugees and a survivor living at Belong Morris Feinmann care village in Didsbury, has been unveiled in their home’s synagogue, honouring them and the millions of Jews who suffered persecution in the hands of the Nazis in World War II.

Frances Waldek (100), Gisela Feldman BEM (98), Frania Strauss (97), Sonja Sternberg BEM (96), Hans Rose (94), and Peter Mittler (91), have each provided their own words about life during the traumatic era and the struggles they faced. Their remarkable stories, some handwritten, accompany poignant portraits which have been prominently displayed for posterity. 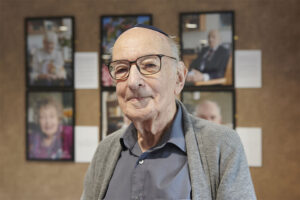 Angela Luckett, religious and cultural coordinator at Belong Morris Feinmann spearheaded the project. She said: “The Holocaust touches the lives of all of us and the foundations of our care village were borne out of our plight, having been originally set-up by Jewish refugee, Morris Feinmann, to help those fleeing Europe in WWII and settle here in Manchester.

“We’re very passionate about preserving history and that is the aim of the project, to document an important part of our story and to educate future generations.”

The initiative, supported with a generous contribution from The Feinmann Trust, was inspired by The Prince of Wales commissioning leading artists to paint seven Holocaust survivors for an exhibition at Buckingham Palace, earlier this year.

Among those photographed by Gwen Riley Jones for the Belong exhibition include former University of Manchester academic, Peter Mittler. Aged 8, he fled Nazi-occupied Austria to the UK following the devastation of Kristallnacht, ‘Night of Broken Glass’, which saw violent anti-Jewish demonstrations across the continent. He went on to build a distinguished career, heading up the country’s first research centre for special educational needs and more recently, he has championed the rights of people living with dementia.

Angela Luckett continues: “We shared a wonderful L’chaim with family and friends for the unveiling of the portraits. It was very moving and it’s important that no-one forgets our past – we invite everyone from the community to come and have a look.”