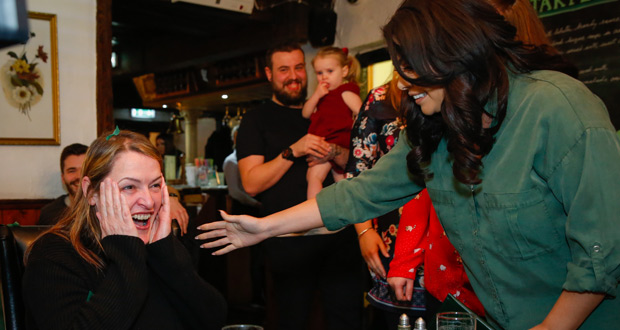 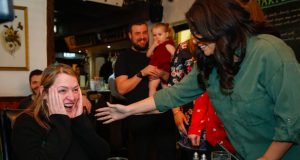 A hardworking Newcastle nurse was left speechless after television star Scarlett Moffatt teamed up with Richmond Sausages to surprise her with a dream holiday to Italy.

Maria Vincent, 52, director of nursing at local care home Rayson Homes and a former cancer nurse, has been recognised in Richmond’s Nation’s Favourite campaign for her dedication and inspiring efforts to always put others first.

Working as a cancer nurse for 20 years before taking over and transforming local care home, Rayson Homes, into a full-service support residence for adults with learning difficulties, Maria was instrumental in setting up the ‘Alternative Headwear Project’ in Newcastle to make women feel beautiful during treatment. Working with local charity groups, she sourced special head scarfs for patients, providing them with information on how to wear them and how to deal with the concept of hair loss when diagnosed with cancer – a project which has now become standard practice for cancer care nationwide.

Nominated in Richmond’s Nation’s Favourite campaign by her daughter, Maria had no idea that a typical dinner with her husband at her favourite Italian restaurant would soon turn into a celebration to remember.

Half-way through her meal, the entire restaurant, including the wait staff and fellow diners, launched into a live, acoustic rendition of ‘That’s Amore’, serenading her at her table.

To further her surprise, Scarlett Moffatt entered the room with her closest family members – revealing her to be one of the nation’s favourite workers in an emotional speech, before rewarding Maria and her husband with an all-expenses paid dream holiday to Italy.

Maria was selected from hundreds of entries in Richmond’s campaign which called on the nation to nominate hard-working heroes who make a difference in their local community.

Scarlett Moffatt, said: “Maria is such a special person who goes out of her way every day to help those around her. She even took on an extra shift at the care home she works at after our surprise dinner!

“I’m delighted to have been a part of this celebration and to get to say ‘thank-you’ to Maria for everything she does, with the help of Richmond Sausages and her closest family.” 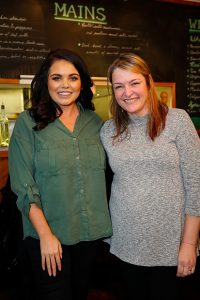 Maria Vincent, said: “Helping people is something that comes naturally to me – I follow my parents in that respect, and hope to be a role model for my kids and grandkids growing up. My patients and residents become like family – I just want to help in every way I can, whether that is taking them to see their granddaughter get married, or siting with them bedside so that they aren’t alone.

“Italy is very special to me and my husband, so it was such a shock to receive this surprise from Richmond. There are thousands of nurses across the country who are worthy of this recognition and it’s lovely to have the work we do highlighted.”

The ‘Nation’s Favourites’ has seen Richmond travel up and down the country with the help of a celebrity squad, including Anton du Beke, Aston Merrygold and Rebecca Adlington, to recognise the workforces voted by the nation to be most deserving.

Dawn Spencer, Marketing Director, Richmond Sausages, said: “Our nation is made up of some amazing people, so we thought it was time we said thank you to these everyday hard-working heroes, like Maria, who often fall under the radar despite the incredible work they do.

We’re so proud to have been able to celebrate some of the Nation’s Favourite workers in this campaign and can’t wait to celebrate more of the nation’s favourite moments later this year. Stay tuned.”