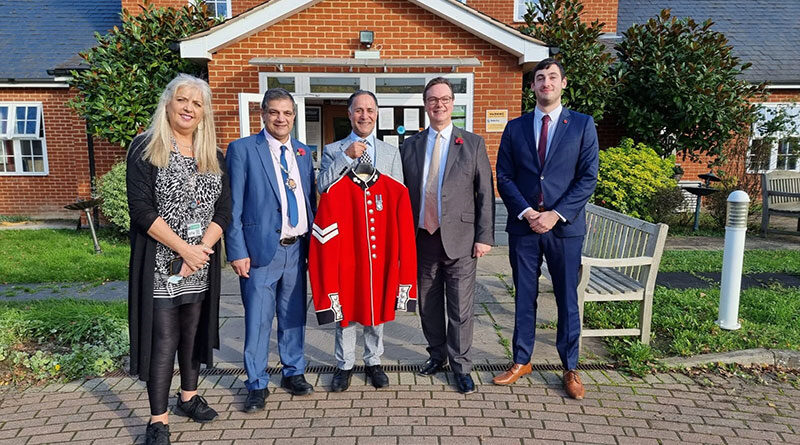 A Surrey care home welcomed one of Her Majesty’s pallbearers to hear and reflect on the wartime memories of its veteran residents and share his experiences from one of the most historical events in modern history.

Lance Corporal Tony Flynn, of the 1st Battalion Grenadier Guards, visited Princess Christian Care Centre, part of the Nellsar group, to hear and reflect on the mix of poignant and uplifting memories of the home’s veteran residents who had lived through the Second World War.

Tony, 23, returned to his hometown following a recent tour of Iraq and was welcomed to the 96-bed care home, originally built in 1914 as a home for wounded soldiers, having recently served as a pallbearer during the state funeral of the late Queen Elizabeth II.

Watched by billions across the globe, Tony was credited for his ‘impeccable’ role alongside seven members of his regiment who carried the coffin of Her Majesty before laying to rest the longest-serving monarch in British history on Monday, 19th September.

Commenting on the experience, Tony said: “It’s been an unforgettable few weeks, to say the least. Serving as one of Her Majesty’s pallbearers was the greatest honour of my life and was made even more special by the fact that it was an experience shared by only seven other people across the globe. To be honest, it still hasn’t sunk in and I don’t think it ever will. Rewatching the day unfold at Westminster Abbey and listening to everything that was happening outside the room was probably the first moment where I truly understood the magnitude of the day.”

A former pupil at Holmesdale School, Snodland, Kent, Tony joined the infantry regiment more than three years ago and recently married his long-term partner, Hayley, Resident Liaison at Nellsar, who accompanied him during the service.

Tony spent the morning speaking with a host of wartime veterans at the home before being joined by Woking Town Mayor, Saj Hussain and local MP, Jonathan Lord, for an afternoon of remembrance and reflection.

Speaking of his day, Tony said: “It was so nice to return to my hometown for a day that centred around appreciating everything that’s been made possible due to the sacrifices of those before us. It was a very informative and humbling experience to spend the day with Princess Christian’s residents and families. I really enjoyed exchanging life stories with some remarkable individuals as I don’t often get the chance to hear stories from the past. To accompany the local veterans for a day of remembrance and hear first-hand about their wartime experiences serving our country, was something I’ll never forget.”

Mario Taherian, Registered General Manager at Nellsar’s Princess Christian Care Centre, said: “As with every year, it was a very special day for everyone connected with Princess Christian Care Centre and the wider Woking community. Our staff and residents were delighted to be joined by Tony, who knows first-hand what it means to serve in the line of duty. Tony is a remarkable individual and our residents loved chatting with him and exchanging stories – even our resident cat made herself comfortable on his lap!

“It was something that our staff and residents have long been looking forward to and were well prepared to make wartime displays and wreaths using poppies, while sharing and celebrating the medals of residents who were active in the war. An afternoon of poignant reflection was followed by tea and cakes before we enjoyed our resident singer, Vick, performing some great songs, including a moving performance of ‘The Last Post’ on the trumpet. All in all, the day was an overwhelming success. I’d like to thank Tony, Saj and Jonathan for playing such an influential role in bringing a smile to our residents’ faces.”