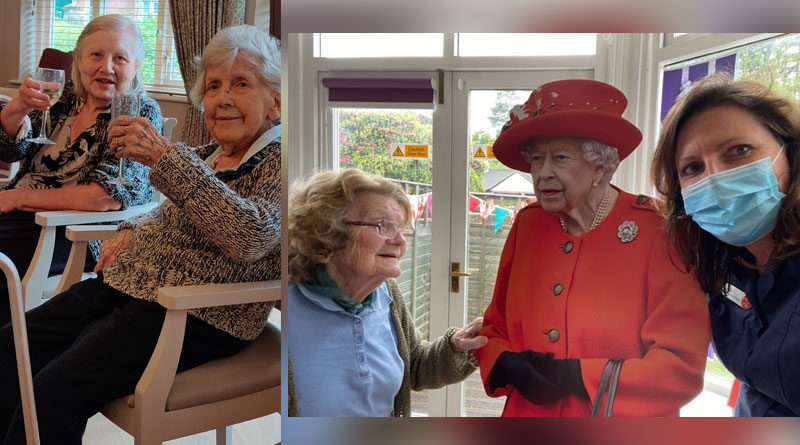 HC-One care homes across the country joined in with the celebrations from 2nd – 5th June to mark Her Majesty The Queen’s Platinum Jubilee, celebrating 70 years on the throne.

Residents at Market Lavington Care Home which offers residential, nursing and nursing dementia care in Devizes, gathered together and celebrated the Queen’s Platinum Jubilee with an indoor tea party.

1940s and 1950s music played in the background, and Residents and Colleagues sang and danced along to the music, as they talked about how they used to go dancing every Saturday night. They enjoyed listening to classics from their era and reminiscing together.

“Let’s raise a glass to the Queen’s 70 years on the throne.”

“It was a very enjoyable afternoon, both for Residents and Colleagues to celebrate together; enjoying music, cakes and memories.”

At the Beeches residential care home on Tameside, jubilee celebrations included indulging in traditional treats, games and lots of reminiscing.

The jubilee celebrations started with Residents being served with a traditional English tea and biscuits; everyone enjoyed a variety of treats including firm favourites custard creams, rich tea and bourbons. Residents also enjoyed a fish and chip dinner from the local chip shop.

Television coverage was also shown and the topics of conversation went all the way back to 1952, when the Queen had her coronation. This sparked much discussion among Residents on what they remembered from that special day.

On Friday, everyone was dressed to impress, as the home held a traditional street party. A buffet was prepared by the home’s catering team, and a selection of cakes were on offer for Residents, Colleagues and guests. Everyone enjoyed listening to music from artists such as Vera Lynn and The Andrew Sisters. Jubilee bingo, quizzes and other games were also on offer throughout the course of the jubilee, whilst the nation’s celebrations played on the TV in the background.

“Celebrating the Queen’s Jubilee has been lovely with the Residents. We have had two really good days with plenty of activities and home decorations and everyone has enjoyed themselves.”

Residents at Gittisham Hill House residential, nursing and dementia care home in Devon really enjoyed celebrating the jubilee and loved nothing more than the opportunity to get a selfie with “Her Majesty the Queen”. Residents had great fun taking it in turns to snap photos with the life-sized cardboard cut-out of the Queen

Everyone enjoyed the jubilee celebrations on Friday, where they listened and sang along to music, and indulged in a special buffet and ice-cream in the garden.

“People living with dementia especially seemed to light up when the talk turns to royal reminiscence and chat about the Queen’s Coronation and the Platinum Jubilee.”