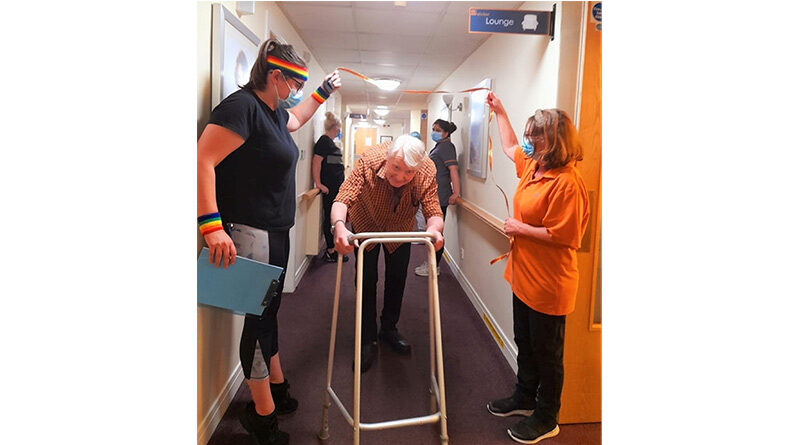 HC-One care homes across the UK have been enjoying watching the Tokyo 2020 Olympic Games. Colleagues have also been providing a variety of fun filled Olympic themed activities throughout the course of the Games, which has allowed Residents to show off their talents and display their competitive spirit.

At Winters Park Care Home in Penrith, Residents have been getting into the spirit of the Olympics by getting creative and creating Olympic rings, torches and uniforms. Residents have also been enjoying watching the games and cheering for the winners.

“The Olympics is such a wonderful event and brings people together to cheer for their nation. Go for gold Great Britain!”

In Glasgow at Darnley Court Care Home, Colleagues hosted a selection of their own Olympic related events for Residents to participate in.

Colleagues arranged a number of activities including hoopla, long throw and discus for Residents to compete in. Everyone enjoyed participating in the fun filled day, with the winner of each event receiving a medal. A great time was had by all, with Resident’s commenting on how much fun they had taking part in their own Olympics.

“It was a fun-filled day here at Darnley Court, we are all excited to support Team GB.”

At Finavon Court Care Home in Forfar, the home held its very own version of the Olympic Games for Residents and Colleagues to participate in.

The Games comprised of a variety of activities including a race, discus and a team potato and spoon race. Everyone got in the spirit of the competition and winners received medals.

The kitchen team also prepared Olympic-themed cupcakes for the event which were served after the Games, along with well-earned refreshments.

“I am pleased our Residents had a wonderful time at our Olympic Games, we are all ready to cheer on Team GB.”

Residents at Oakland Care Home in Rochdale competed in their own mini-Olympics tournament.

New Resident, Bridget King, who arrived a couple of days before the home’s Olympics began took gold in the towel folding. She had some stiff competition from other Residents, but ultimately won by a mile. Bridget couldn’t stop smiling and was extremely pleased to have won gold and received a medal.

“It was lovely seeing the Residents receive their Olympic medals. I enjoyed watching them have lots of fun!”

At Stadium Court Care Home in Cobridge, Stoke-on-Trent, Colleagues hosted their own Olympic Games for Residents to coincide with Tokyo 2020.

Everyone had fun joining in with Colleagues from a variety of departments participating in the event. Alison Davis, Wellbeing Coordinator, organised the week of Games, starting off with an egg and spoon race. The Residents cheered on their own team versus Colleagues. When the race started, Babs who works in the kitchen, ran off like a shot and won the race. Ruth, one of the Residents of Spode House community won her race and she was so excited. Participating in and watching the events reminded Residents of what it was like participating in sports day events at school and they enjoyed reminiscing about these fond memories.

On the day of the final event, the bean bag race, Residents were encouraging and cheering for the teams they were supporting but overall, it was the kitchen team who won and the Stafford community Residents.