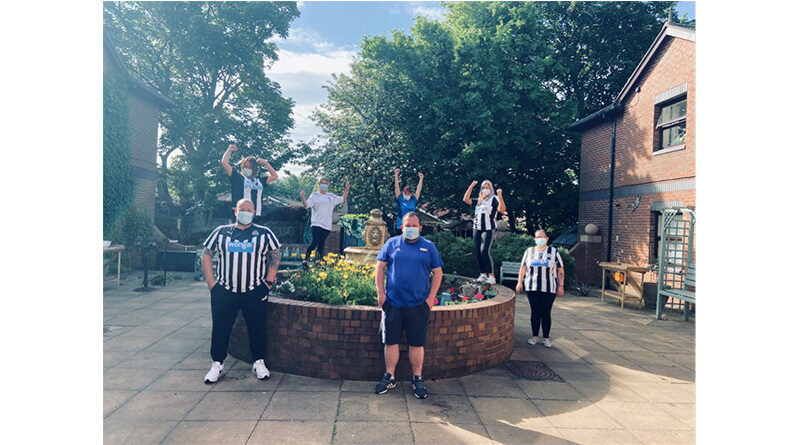 The Euro 2020 football tournament is underway, a year after its postponement, Residents in HC-One care homes across the UK are getting in the football and patriotic spirit and supporting their national teams by watching the matches and cheering the players on.

Residents at Yew Trees Care Home, Dukinfield, Greater Manchester, are going football mad watching the tournament. The England matches are a huge hit amongst Residents who are enjoying watching the games, accompanied with snacks and a choice of beer. Residents at the home are delighted with the results so far, especially the long-awaited for win over Germany and spirits are very high. Residents are thoroughly enjoying watching England and cheering them on and are looking forward to watching the quarter final against Ukraine on Saturday night!

“It’s great seeing the Residents get so involved in these events!”

In Hambleton, at Bankhouse Care Home, all eyes were on the recent games, with Residents enjoying watching the football and cheering on England as the drinks flow and flags are flying.

For the first England match, Colleagues Linda, Ali and Thealyn at Bankhouse Care Home, Poulton Le Fylde in Lancashire kindly provided refreshments. Catering Colleague, Kerry made a homemade lemon cake and there was an assortment of snacks on offer for everyone to enjoy.

Audrey, a Resident who lives at Bankhouse Care Home, happily raises a toast with her oversized inflatable large beer glass whenever England score!

“It is so heart-warming to see the Residents coming together to support the Euros.”

At Hartford Court Care Home in Cramlington, Residents and Colleagues are in high spirits with the 2021 UEFA European Football Championship underway.

Colleagues are suppling a variety of football-themed activities for Residents throughout the competition, including arts and crafts, baking, signing up for the England team and receiving a football award.

For those who aren’t football fans, Colleagues are arranging some extra activities including a drive out for some ice cream. A great time is being had by all, with Residents commenting on how much they were enjoying the Euros activities and cheering on the teams they supported through the matches.

“We have some dedicated football fans at Hartford Court, so having some fun-filled football activities has brought smiles to the faces of many of our Residents.”

In Glenrothes, Scotland at Balfarg Care Home, Residents and Colleagues showed their support for their national team during the 2021 UEFA European Football Championship.

To kick off the first match day against the Czech Republic, Residents made Scottish flags to wave as they watched the match. Residents were served crisps, chocolates and beer as they gathered round to watch the game on the big screen, and everyone sang Flower of Scotland and cheered as the whistle was blown to signal kick off.

After a disappointing first result, everyone at Balfarg Care Home was hoping for some more luck in the coming games, however, despite their best efforts and an impressive 0 – 0 draw against England, Scotland were sadly knocked out at the Group stage.

“This felt like being at the pub with my mates.”

“It’s wonderful to see everyone getting in the spirit, we were cheering for Scotland until the very end of the Croatia match.”

Colleagues have arranged football themed activities for Residents, including a penalty shoot-out at the start of the tournament. Everyone has come together when the whistle is blown for each England match, with Residents cheering for their team, and some wearing their favourite teams football shirt.

A great time is being had by all, with Residents commenting they are looking forward to watching the remainder of the matches and everyone is hoping that football is coming home.

“It’s great to see everyone getting in the spirit of the event and celebrating, after a difficult year for most, an event like this really does bring everyone together.”

It was an exciting moment for everyone at Drummohr Care Home in Wallyford, Musselburgh when Scotland qualified for the UEFA European Football Championship for the first time in 23 years.

In anticipation of the festivities, Colleagues at Drummohr decorated the home with Scottish flags and Residents came together to watch the matches, with alcoholic and non-alcoholic refreshments served alongside nibbles. Residents enjoyed cheering for their home team and singing traditional Scottish songs, until Scotland’s unlucky early exit at the Group stages.

“We were all hoping that Scotland would bring the trophy home this year, however it wasn’t meant to be – nevertheless the atmosphere here at Drummohr is wonderful.”