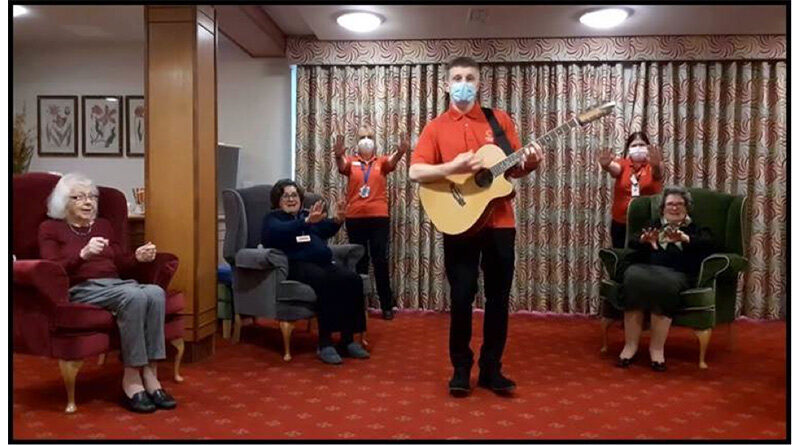 Staff and residents at a top-rated Dorset care home have recorded a catchy music video about their experience of Covid prevention.

In a video posted on YouTube, Sam sings and plays guitar as two colleagues and three residents sing and perform dance moves to the tune.

The lyrics include lines such as ‘Wash your hands, don’t touch your face, leave some space’, ‘We know what to do, you’ve got to leave some room’ and ‘We’ve got to see what we can do to save us from all this doom and gloom’.

Further residents are shown doing hand movements in time with the song while others may be seen enjoying puzzles and playing bingo.

Sam, whose musical interests include hip hop and R&B, said: “We had been planning a Newstone House variety show and our kitchen colleagues suggested we should perform a song about Coronavirus. We wanted to make it all a bit of fun and involve residents, and then the idea of filming a video came up. It was lovely to do.”

Sam has had a connection with Newstone House for more than five years, originally doing weekend waitering shifts.

He joined the Companionship Team at the end of 2020 having studied music at both Wiltshire College in Salisbury and the Academy of Contemporary Music in Guildford.

He says his new role is ideal, adding: “I really wanted a job that would involve me in doing music and I love working with the residents to help make their day a little brighter.”

Sam created the music mix on a laptop, using production software to play in drums, bass and keyboard alongside the vocals and guitar.

He was helped by Fiona Pritchard, Colten Care’s Music and Arts Partner, who offered lyric suggestions, devised choreography and did the filming.

Resident Linda Porter, who appears in the video, said: “We really enjoyed taking part, singing along to the song and doing all the hand movements. It was great to be involved.”