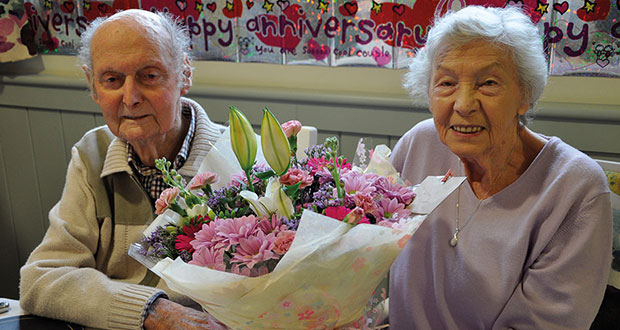 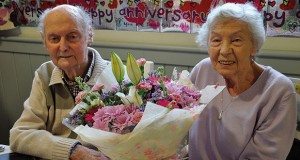 Platinum pair Richard and Hilda Snelling, 94 and 90 respectively, celebrated becoming one of Britain’s longest married couples with a party at Lymington’s Belmore Lodge care home where Richard has lived for the past six months.

Southampton-born Richard was serving in the army when he met the young Hilda Williams at a dance near her childhood home in Beaconsfield, Buckinghamshire.

As part of his duties as rations corporal at the top secret Wilton Park army base, he was responsible for the collection, distribution and recording of rations for up to 500 people. He was helped by a number of German prisoners of war working under him.

Among the more senior Germans held at Wilton Park at the time were high-ranking Nazi politicians such as Rudolf Hess.

The couple were married at Beaconsfield Parish Church in April 1946 when Richard was 24 and Hilda 20. Sixty guests attended their reception at the local Royal British Legion Hall and they honeymooned in Newquay, Cornwall.

On her wedding dress, Hilda wore a mother-of-pearl brooch which was a gift from her grandmother and is still a treasured family possession 70 years on. Some of Richard’s POWs also gifted flowers for the bride.

After their wedding, the couple moved to Southampton where they lived until last year. Richard swapped the army for a career as a precision tool engineer, working for many years for the manufacturing firm Luff & Smith.

The couple had two children and enjoyed keeping fit through dancing and playing badminton until well into their 80s. Founder members of the Solent Wine Circle, they made their own wine and have always allowed themselves a daily glass.

Hilda now lives in warden-assisted accommodation in Milford-on-Sea and visits Richard at Belmore Lodge most days. Family gatherings include time with their two great grandchildren.

Asked what the recipe is for a long marriage, Richard said: “I’m not sure. It just works out sometimes.”

But daughter Pauline Aldworth said: “They have kept each other going with much love, affection and laughter and with a great deal of mutual respect.”

Team members at Belmore Lodge, run by family-owned Colten Care, laid on a party with lunch, champagne and cake in the home’s Rooftop Café.

Activities Organiser Claire Fryer said: “It was a lovely occasion for a wonderful couple with a loving family. We were only too delighted to help them all celebrate.”