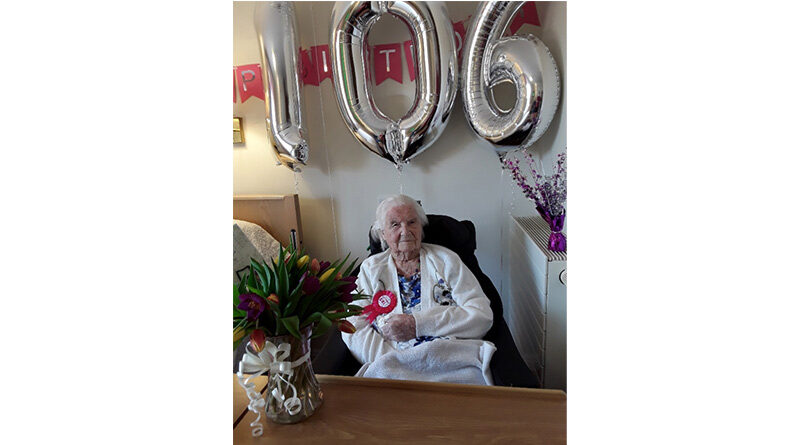 One of the south’s oldest residents has celebrated her 106th birthday at a Hampshire care home.

When Mabel Looker was born in spring 1915, the First World War was less than a year old, most British homes were still lit by gas and the cinema was a new craze.

When staff at Colten Care’s Belmore Lodge in Lymington asked for her secret of longevity, Mabel replied with a smile: “I would love to know the answer myself.”

Mabel’s big day involved a Covid-safe visit from her daughter Janet Morley, a Happy Birthday serenade from care staff, glasses of bubbly and a homemade marzipan cake, her favourite.

Knowing that one of Mabel’s enduring passions is the Spitfire, team members presented her with the gift of glass ornament depicting the iconic aircraft.

It brought back happy memories of a helicopter ride Mabel took at the age of 98, flying alongside a Spitfire on a trip over the white cliffs of Dover.

A regular visitor to airshows, Mabel had long held a dream to be up close to a Spitfire in the air and she was especially pleased when the pilot allowed her to inspect the cockpit after the flight.

Born in Manchester and related to the Winder family of artists, Mabel moved to Swansea when she was still a young girl and later to Bournemouth where her parents opened a guest house.

She was a teenager when she met her future husband Cyril at the youth club in St John’s Church, Boscombe.

They married during World War Two and had two children. After seeing wartime service in the RAF, Cyril later became chief clerk in the borough surveyor’s office in Christchurch.

Mabel worked at a laundry in Pokesdown, then in-service as a cook in Bournemouth, and later as a home help.

In her spare time, she knitted thousands of soft toys for charity and enjoyed gardening, cricket and going to watch horseracing especially at Salisbury Racecourse.

One of her happiest holiday memories is of going on a cable car trip to the top of Table Mountain in South Africa.

Before moving to Belmore Lodge, Mabel lived in nearby Highcliffe. She is the eldest of four Belmore residents who are aged 100 or more.

A few miles along the south coast, Colten Care has another 106-year-old resident living at Outstanding-rated Canford Chase in Poole.

Across the whole group of 21 Colten homes in the south, there are three 105-year-olds and four residents who are aged 104.

Julie House, Belmore Lodge Home Manager, said: “Mabel is a remarkable lady who is kind, amusing and young at heart. It was a great privilege to help her celebrate her 106th birthday with lots of fun and smiles, and of course the chance to reflect on her experiences and memories of a life well lived.”