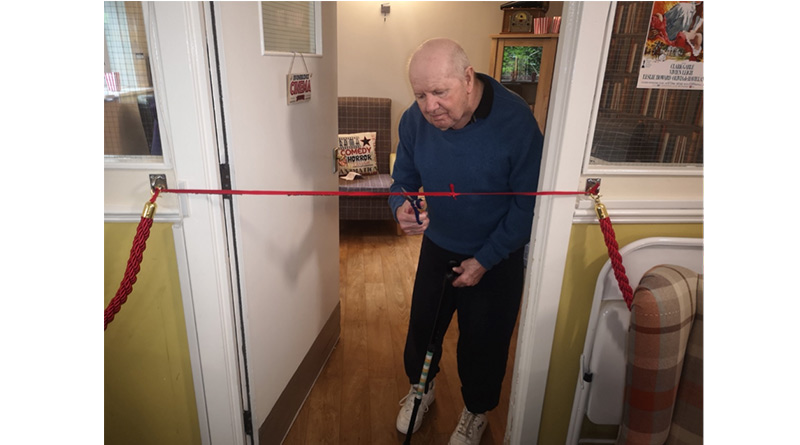 Avonbridge care home, Hamilton, has thanked its local community for helping to create an in-house cinema room for its residents.

The home, on Old Avon Road, sent out an appeal to the public for unused DVDs to which they received hundreds of well-known titles including John Wayne and Betty Davis box sets and musicals including Les Misérables. So far, residents’ favourite movie has been Calamity Jane, which they have enjoyed singing along to.

Along with the donated DVDs, the home sourced VIP red ropes, cinema-themed cushions and American-style popcorn boxes, ready for weekly cinema screenings of films selected by the residents.

During the films, residents have been treated to lots of sweet delights by the staff at Avonbridge including ice cream brought round by the hand-decorated ‘Avon Ice’s’ trolley, made from an unused medicine trolley.

Resident Ian Young, 68, was invited to cut the ribbon and officially declare the cinema room ‘open’!

Ian said: “The Cinema room is perfect, it’s a great idea for relaxing together. My favourite film so far has been Sully, about the pilot who had to land a plane on the Hudson River.”

Margaret Jakuz, 64, resident at Avonbridge care home, said: “I love being able to watch some of my favourite films. I love anything with Mel Gibson in it, Lethal Weapon is my favourite.”

Michelle-Ruiz Beltran, home manager at Avonbridge care home, said: “We’re really grateful for the hundreds of DVDs we received from our local community, it has really helped to get our in-house cinema up and running.

“The residents have thoroughly enjoyed the cinema screenings however, I think they like the VIP treatment the most!”

Avonbridge care home forms part of Larchwood Care and is managed by Healthcare Management Solutions. The care home is regulated by the Care Inspectorate and is rated as ‘Very Good’ in wellbeing and has a ‘Good’ overall rating in all other areas. Across the Larchwood portfolio, the regulator ratings reflect the exceptionally high standards of care given and the drive of every team member to continually improve the care they give.