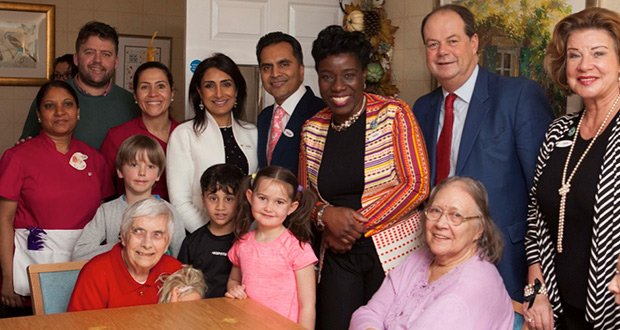 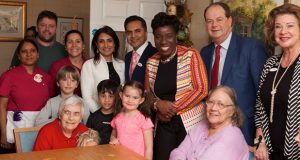 Care provider, Hallmark Care Homes have installed their first Tovertafel (‘Magic Table’ in Dutch) in their facility, Kew House, making it the first of its kind in Wimbledon.

The Tovertafel is an award-winning innovation from the Netherlands, which is renowned for its cutting-edge approach to dementia care. The technology contains a series of games for people living with mid-to-late stage dementia. It has been designed to encourage instinctive participation, inviting engagement and stimulating a level of physical and social activity rarely seen in people living with dementia in the later stages of their journey.

The Tovertafel is the product of six years of research, designed to stimulate people living with mid-to-late stage dementia socially, cognitively and physically. The games are light simulations of familiar activities such as gardening, fishing and popping balloons to trigger a sense of reminiscence among players, encouraging both individual and group play. The Tovertafel games are projected onto a table to create a safe, fun gaming environment for all participants and seeks to create daily moments of happiness for all that play.

On the installation, General Manager at Kew House Care Home, Yetty Adepegba said: “We are extremely excited to be amongst the first care providers in the UK to have this highly innovative and interactive magic table in our care home.

“It has been particularly pleasing to see the huge difference the Tovertafel has made to our residents. We have had residents who previously had not been communicating verbally, totally engrossed in the magic table singing along or reciting old sayings.

“The Tovertafel has also increased meaningful moments with the residents, relatives, team and visitors and we are now looking at new ways we can continue to keep the engagement level as high as it has been.”

John Ramsay, the CEO of Shift 8 Limited – the company which brought the Tovertafel to the UK – said:

“We are thrilled that Hallmark Care Homes have recognised the joy that activities bring to their residents and installed their first Tovertafel at Kew House. The reaction from the residents has been incredibly moving and I can’t wait to see how they continue to develop.”